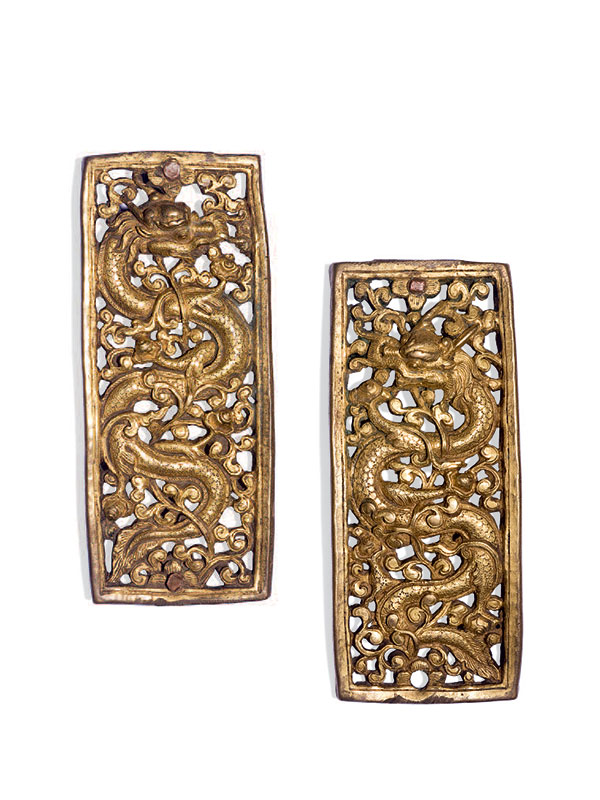 A pair of giltbronze belt plaques of rectangular form. Each plaque is decorated in openwork relief with a sinuous dragon, the surface of which has a ring-punched design. The dragon’s heads are well defined with bulging eyes, arched eyebrows and ears, bushy mane, and two pointed horns. Each of the dragon’s four three-clawed feet holds a round object, possibly a pearl. The dragons appear to weave in and out of the tendril background. Either end of the plaques has a drilled hole for attachment to another material. The gold patina overall is well preserved.

Both the quality of the workmanship and the dragon motif suggest that the original owner of these belt plaques was of high status. By the Ming dynasty the predominant ornament type was the belt, and different types were restricted to different ranks, as specified in the Ming hui yao: “the third rank have gold and patterned belts.”[1] The motif of dragon-and-pearl also appears as an emblem on official robes, with the dragon associated with imperial power and the pearl symbolising the transcendent wisdom derived from Buddhist Enlightenment.[2] A unique and complete set of gold belt ornaments, composed of 20 pieces, including four closely comparable rectangular plaques, each decorated with a sinuous four-clawed dragon, was unearthed from Bancang village in Nanjing City and is now in the collection of the Nanjing Municipal Museum.[3] Another comparable Ming dynasty gold belt ornament of ruyi-head shape, similar in the swirling dragon design, is in the Mengdiexuan collection.[4]