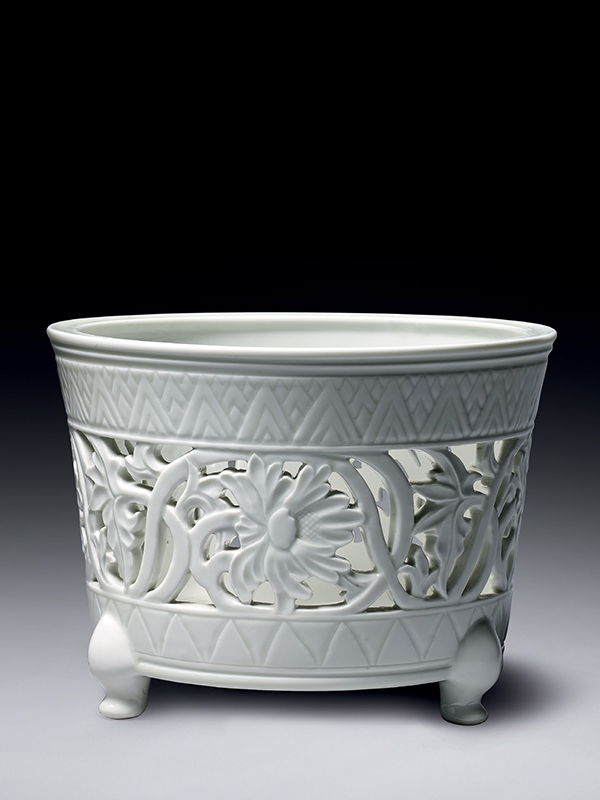 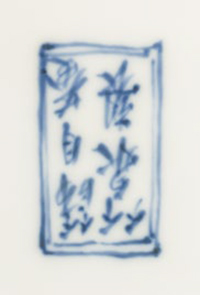 A porcelain incense burner of cylindrical form, supported on three short, cabriole legs.  The sides taper outward upwards and are pierced with a central frieze of large lotus flowers and leaves.  The frieze is placed between engraved bands of triangles. The incense burner is covered in an ivory white glaze.  The base is signed ‘Shigetsuan, Chikusen sei’ (made by Chikusen, Shigetsuan studio). It is preserved in its original wood box, tomobako, which is inscribed: ‘Hoko, shiragame, botan-mon, sukashibori binro’ (In an archaic style, white pottery, with peony motif, pierced design, incense burner) and ‘Shigetsuan, Chikusen zo’ (Made by Chikusen, Shigetsuan studio) with four seals ‘Chikusen seizo’, ‘Shigetsuan no in’, ‘Chikusen’, ‘Heian toko (a potter in Kyoto)’.

This large, white-glazed incense burner is made in a Chinese style. The artist, Miura Chikusen I (1854-1915) was the second son of Watanabe Ihei. In 1867 he studied under Takahashi Dôhach III (1811-1879). In 1883 he established his kiln at Gôjôsaka in Kyoto. He was known first for his celadon wares and different types of glazing and later for his imitations of foreign wares. Working in the Ming and Qing style, he was also known for sculpting porcelain and including gems and coral.  He used western colours on Japanese porcelain and he developed Yuyaku-Tomeimon (transparent glazing). In 1904 he developed and created, mixing jade, semiprecious stone as well as coral for colouring on Sometsuke porcelain. He received great praise at the Chicago and Paris Exhibitions. He published a book title called, ‘Wakan Taisho Tosetsu’ (Japanese Chinese Comparison Ceramic Study). In 1903 he translated the ‘T’ao Shuo’, the famous book on Ching-dynasty porcelains.  He passed on the business to his son Chikusen II (1882-1920) and his family continues the pottery making tradition; the fifth generation Miura Chikusen works in Kyoto.