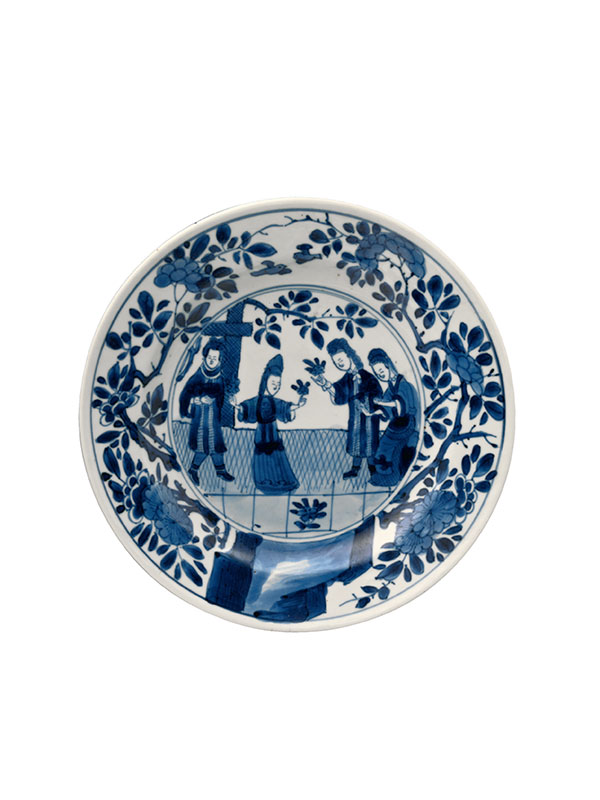 A porcelain plate of circular shape. The centre is painted in underglaze blue on a white ground with two couples dressed in European style. They stand on a terrace and the women, who are clothed in long, flowing robes, sport elaborate, high hair styles. The men wear knee-length frock coats over stockings and boots. One woman and one man hold branches of leaves, which they present to one another. The rim is painted with a frieze of flowering tree peonies and birds. The reverse rim depicts three stylized leafy branches and an artemisia leaf mark to the centre within double rings.

This intriguing plate shows women sporting fontanges, high headdresses popular during the turn of the late 17th and early 18th centuries in Europe, and said to be named after the Duchesse de Fontange, a mistress of King Louis XIV of France. The central scene depicts the so-called “Sense of Smell” taken from a French engraving of circa 1690 by the Bonnart Brothers. The Bonnart brothers, Nicolas, Robert and Henri, worked in France in the late 17th century and are known to have produced designs of fashionable court figures that were copied onto Chinese porcelain. They also made designs of ‘The Five Senses’ of which the Sense of Smell is one. The Artemisia mark is often seen on Kangxi blue and white porcelain.