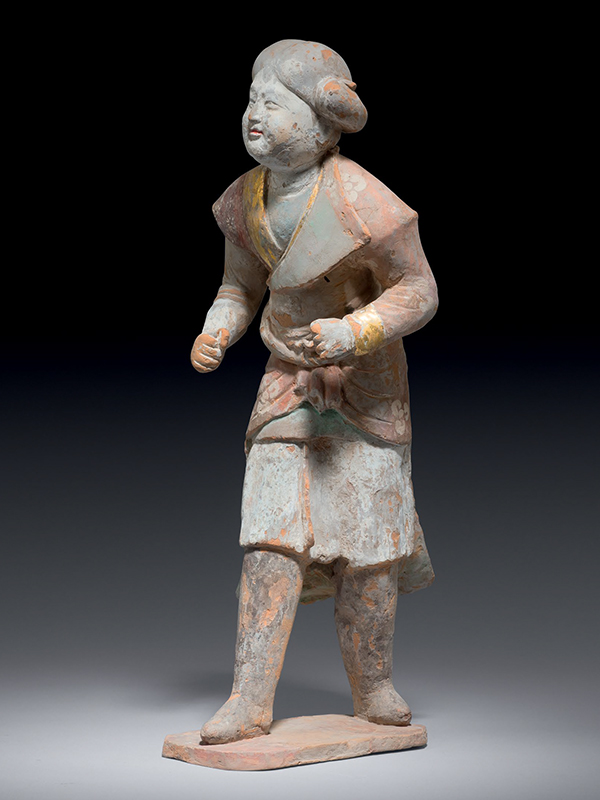 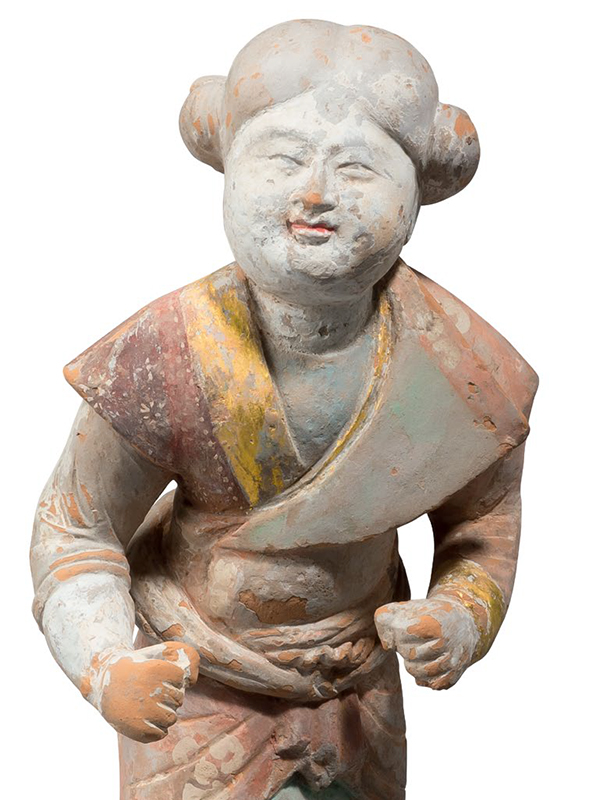 Pottery figure of a groom in foreign dress

A pottery figure of a groom, standing on a rectangular base with chamfered corners.  His feet are placed some distance apart, and he leans forward with his upper body.  The head is slightly inclined to the right, and the face has a beatific expression.  Both arms are half raised with clenched fists, in a gesture that indicates he is holding the reins of a horse or camel.  He wears several layers of clothing including a bolero-style jacket with short sleeves and a knee-length overcoat with wide lapels.  He has half taken off his coat, and tied the right arm around his waist in an elaborate knot. The clothes retain bright turquoise, red, white and black pigments, and the patterns on his clothing are elaborately detailed with stylised floral decoration, stippling and with gilding to the lapels and cuffs. He wears knee-high boots that are covered in black pigment. The groom’s hair is braided into a roll at the back of his head.

The braided hairstyle of this groom indicates that he is of Western Asian or Turkish extraction. However, the somewhat feminine facial features of this dynamically modelled figure introduce the intriguing possibility that this is in fact a lady of the Court dressed as a groom, a deceit not untypical of fashionable behaviour at the Tang court, where elaborate middle-Eastern themed social gatherings were de rigueur. The Tang people were intrigued by exotic foreign customs, and by opening their empire to new settlers, adopted many of their traditions. The vogue for foreign clothes, food, and music became part of the Tang decadent life style. The richness of the groom’s clothing and the remains of gilding on the lapels and cuffs of his coat, which do not exactly represent the kind of attire one would expect to see on a humble servant, provide further evidence that we are looking here at a case of ‘fancy dress’.  Schloss includes several pottery grooms with western Asian features in the 1969 exhibition Foreigners in Ancient Chinese Art at the China Institute in New York.1 A similar figure of a groom, covered in sancai glazes, was included in the 1987 exhibition The Quest for Eternity at the Los Angeles County Museum of Art.2