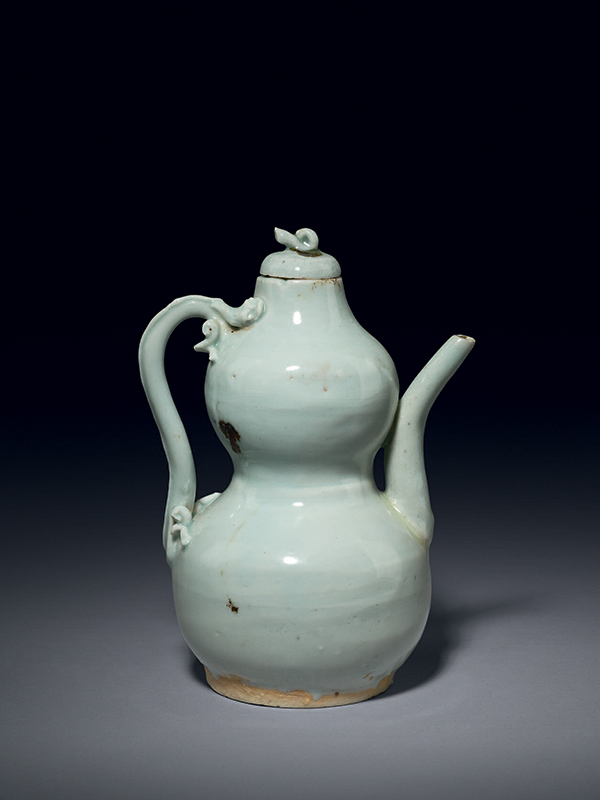 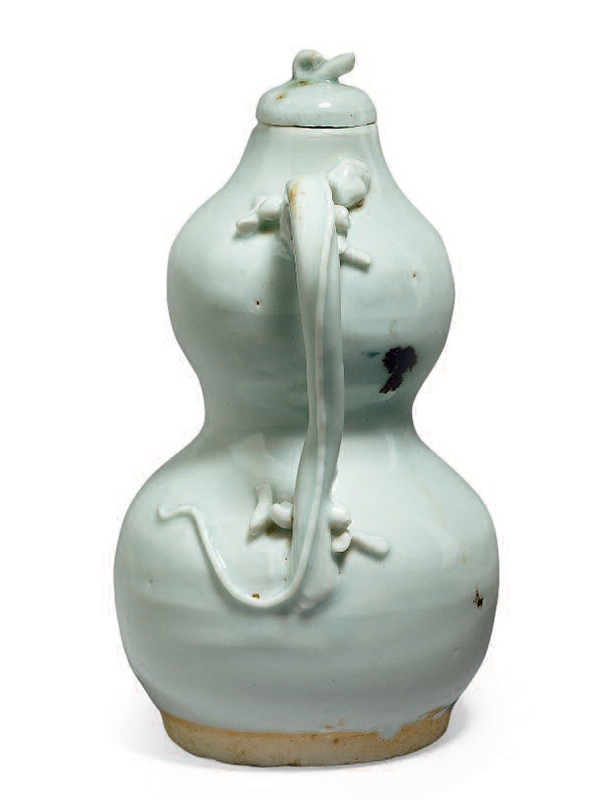 A qingbai porcelain ewer of double­gourd form, supported on a short, straight foot and applied with a long, curved spout and an S­-shaped handle in the form of a chi-­dragon. The chi-­dragon is naturally rendered and well­-defined with bulging eyes, four feet and elongated tail. The short neck of the ewer is surmounted  by a domed cover, which has a finial in the shape of a section of a stem. The ewer is covered in a transparent glaze of pale blue colour, leaving only the base unglazed, and a few iron brown spots of irregular form are visible on the lid and around the body. The unglazed base shows the fine porcelain body.

Undecorated qingbai ewers of double­-gourd form were produced during the Song dynasty (960 ­- 1279), such as an example dated to the 11th or 12th century in the Meiyintang Collection, and another one excavated from Le’an county and dated to 1204.[1] Later during the Yuan dynasty these double­-gourd shaped qingbai ewers were still as popular as their Song dynasty predecessors, and can in general now be distinguished by irregular brown iron­oxide patches applied to the glaze, as can be seen in the present ewer, a rare survivor. In this form, the ewer is the precursor to later ewers of this shape that date from the Ming dynasty (1368 – 1644). Two closely comparable Yuan dynasty qingbai ewers, similar in the double­-gourd shaped body with iron-­brown spots and the dragon handle, are respectively in the collection of the Metropolitan Museum of Art [2] and the Victoria and Albert Museum.[3]  A Yuan dynasty double-­gourd shaped qingbai ewer with a dragon handle was excavated from the Shangqing temple in the Chongqing City in 1954 and is now in the collection of the Chongqing City Museum.[4]