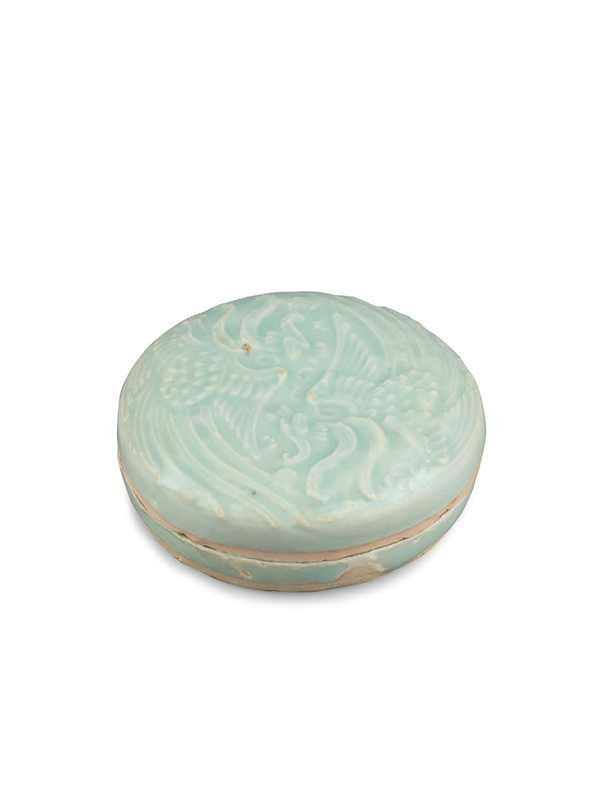 A qingbai porcelain box with domed top and convex base. The cover is impressed with a design of a pair of phoenixes in flight. The box is covered in a thin, translucent bluish-white glaze with a hint of a grey tone, leaving the rims and base uncovered, exposing the white porcelain body, which has a few grit marks adhering to the foot.

The phoenix (feng huang in Chinese) is the king of all birds, and appears only in time of peace and prosperity.1 High quality qingbai wares, meaning ‘blue white’, and also commonly known as yingqing, ‘shadow blue’ were made at Jingdezhen in Jiangxi province, which produced the best of the pure white-bodied porcelains covered with a transparent, icy blue-tinged glaze, such as the present example. A closely comparable qingbai circular box, similarly decorated with a pair of phoenixes and dated to the Southern Song dynasty, was unearthed from Suining city in Sichuan province and is now in the collectionof the Suining City Museum.2 Another closely related box and cover also moulded with a pair of phoenix on the cover was in the Carl Kempe Collection.3