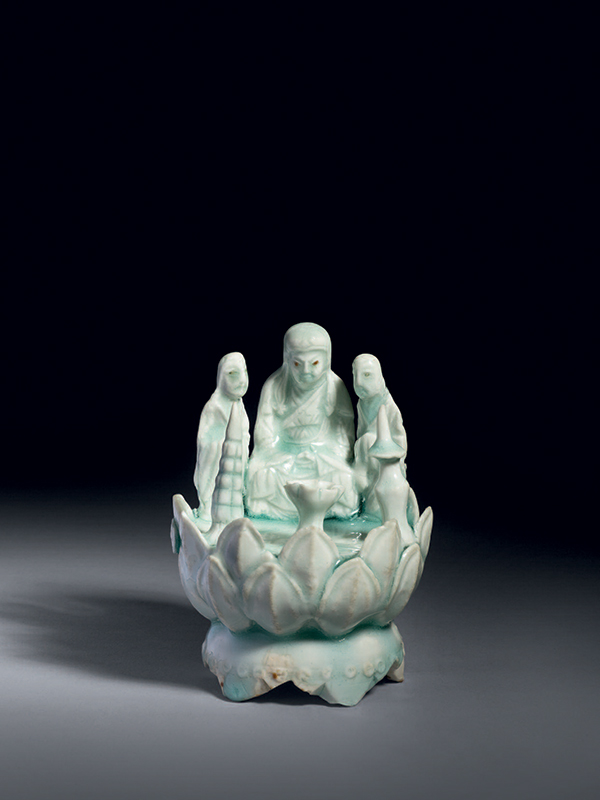 A porcelain Buddhist group formed as a miniature shrine, composed of a seated Guanyin in the middle, flanked by two attendants and with three objects in front.  The group  is supported by a lotus pedestal with an irregular, concave base. The Guanyin is dressed in draped long robes and her hair is covered by a cowl. Her hands are placed on her lap and form the dhyana mudra, the hand gesture of meditation. She has a benign expression with well­-defined facial features. The two flanked attendants stand straight, and their hands, which are covered by the elaborately pleated sleeves of their robes, are held up. Three objects are placed in front of the figures, from left to right: a treasure tower, an incense burner and a kundika. The pedestal is formed by two layers of lotus petals flaring upwards and joined with an irregular base that is turned downwards. The group is covered in a transparent glaze of pale blue hue, leaving only the base unglazed, showing the fine­-grained white porcelain body.

Guanyin, the Goddess of Mercy and Compassion, is the most popular female bodhisattva to appear in Chinese art. She began life as a male, as the Indian god Avalokite´svara. Serene in beauty and bearing, always available to one in prayer, she was a popular figure during the Southern Song dynasty (1127 – 1279), and continues to reign as the favourite goddess in China.[1]  Exquisitely modelled, small­-scale shrines such as the present example from the Song dynasty are extremely rare. A fragmented qingbai porcelain square pedestal of comparable size and composed of three fragmented figures with some offerings in front,  probably manufactured as a miniature shrine, was excavated from the Hutian kiln in Jingdezhen between 1988 and 1999 and is now in the collection of the Jingdezhen Museum  of Civilian Kiln.[2]  In their complexity and fine quality, the figures probably provided the inspiration for some larger ceramic shrines of the Yuan dynasty (1271 – 1368), as well as other devotional objects. A comparable larger ceramic shrine, composed of a seated Xiwangmu (‘Western Mother’) flanked by two attendants and with some offerings in front, was excavated from Hangzhou city in 1978 and is now in the Hangzhou City Cultural Relic and Archaeology Institute.[3]