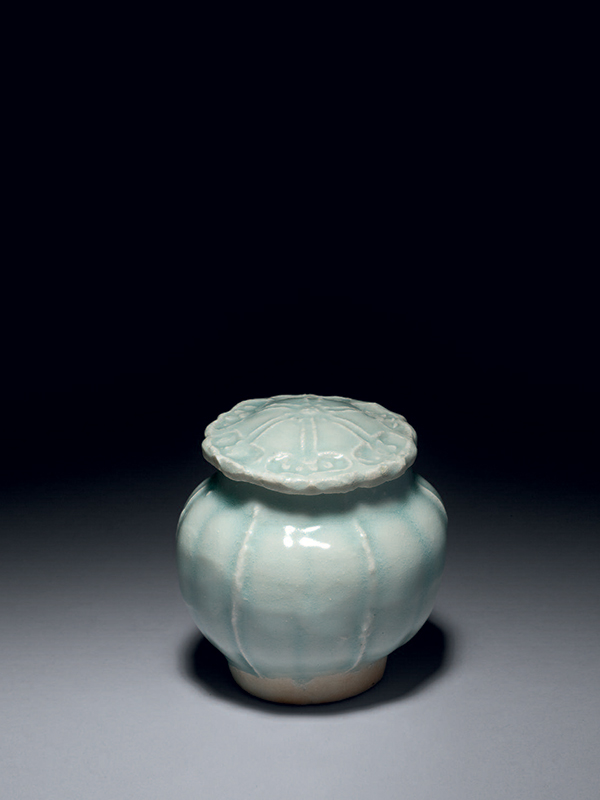 A porcelain jar with a compressed ovoid body, supported on a straight foot, bulging out towards the short neck. The sides of the jar are moulded with vertical raised ribs. The slightly domed cover is fashioned in the form of a blossomed flower, moulded in low relief with six petals radiating from the centre. The interior and exterior of the jar are covered in a transparent glaze of pale blue hue. The cover is glazed on the outside only. The interior of the cover and  the slightly recessed base are unglazed and reveal the fine­-grained white porcelain body.

Produced mostly by kilns in Jianxi and Zejiang provinces, small squat jars such as the present example, sometimes made with a cover and with either lobed lips or foliate divisions, are called heyeguan (‘lotus­leaf jar’) in Chinese and were made for export to other parts of Asia.[1]  Precise dating of jars of this type is difficult; they were made in different sizes during the late Song dynasty and into the subsequent Yuan dynasty. A very similar qingbai jar, slightly larger in size and with a cover of similar shape and design, dated to the Southern Song dynasty, 13th century, is in the Kai­Yin Lo Collection.[2] Another closely comparable jar without cover and of similar size can be dated to 1224, the Southern Song dynasty.[3]  A further comparable qingbai jar dated later to the Yuan dynasty (1271 ­- 1368) is in the collection of the Asian Art Museum of San Francisco.[4]