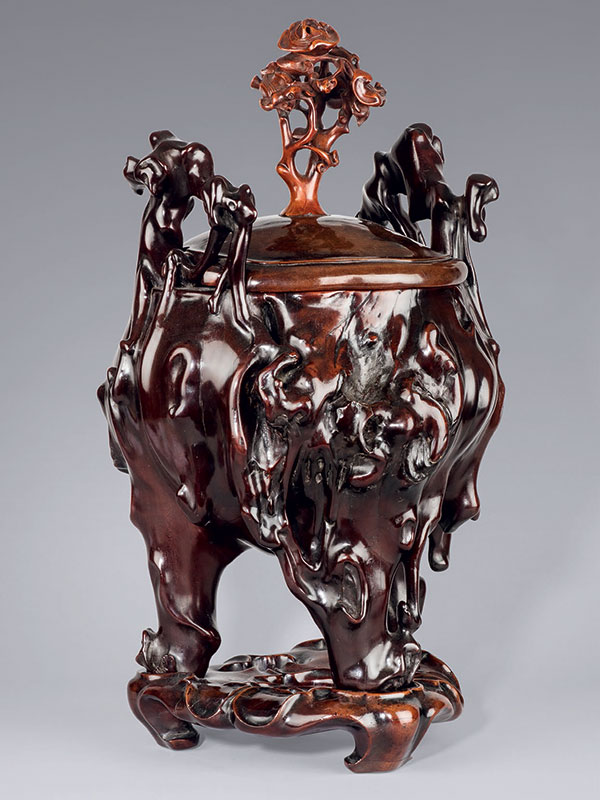 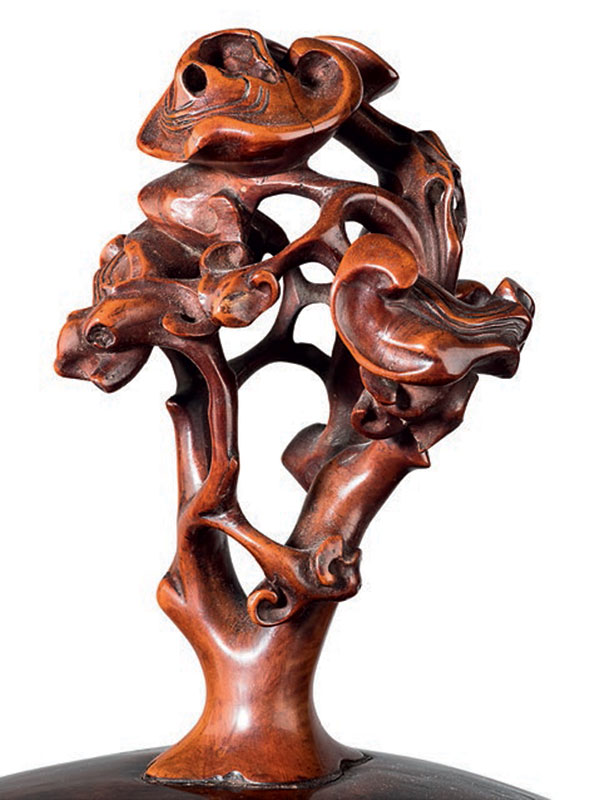 A large censer in the form of an archaic three-legged bronze vessel, ding, carved from a single large piece of rootwood. The round body is supported on three tall legs, with two loop handles extending upwards from the flat rim. Its well-polished smooth surface is carved with rounded, dramatic holes and apertures in addition to its natural fissures and gnarls.  The wood is beautifully patinated and bears subtle reddish and yellowish tones in its brown colour. The slightly domed wood cover has a tall finial in the form of a branch of lingzi fungus, made from boxwood (huang yang mu). The stand is carved from a single piece of wood, with three cavities to accommodate the feet of the censer, and is itself supported on three short splayed feet.  The interior of the cover is incised with a three-character seal mark in a square, reading Yi Lan Tang (‘Hall of bestowing on orchid’).

Furniture made of rootwood seems to have been already popular during the Tang (618 – 906) and Song (960 – 1279) dynasties. A painting attributed to Zhou Wenjin, a court painter who was active around 960, shows a scholar seated in an armchair fashioned from pieces of knotty branches or rootwood.[1]  The associations of rootwood furniture with scholars and monks most likely grew out of Buddhist and Daoist concepts of humility, as well as their attempts to live harmoniously with the natural order of things.[2]  In Siggstedt’s study of rootwood furniture, he notes that its use remained rather restricted until it became fashionable in the late Ming dynasty (1368 – 1644) within the circle of literati.[3]  All pieces of rootwood furniture reflect a cultivated literati taste for peculiar effects rendered by natural forces rather than human artifice, and they consequently became very popular in the scholars’ studios and gardens to the south in the Yangtze delta and Guangdong regions during the Qing dynasty (1644 – 1911).[4]   Three smaller rootwood censers of ding form, dated to the 18th century were formerly in the Qing Court collection: one with a wood cover fitted with a Yuan-dynasty (1279 – 1368) jade finial is now in the collection of the National Palace Museum, Taipei;5 two other censers are in the collection of the Palace Museum, Beijing.6