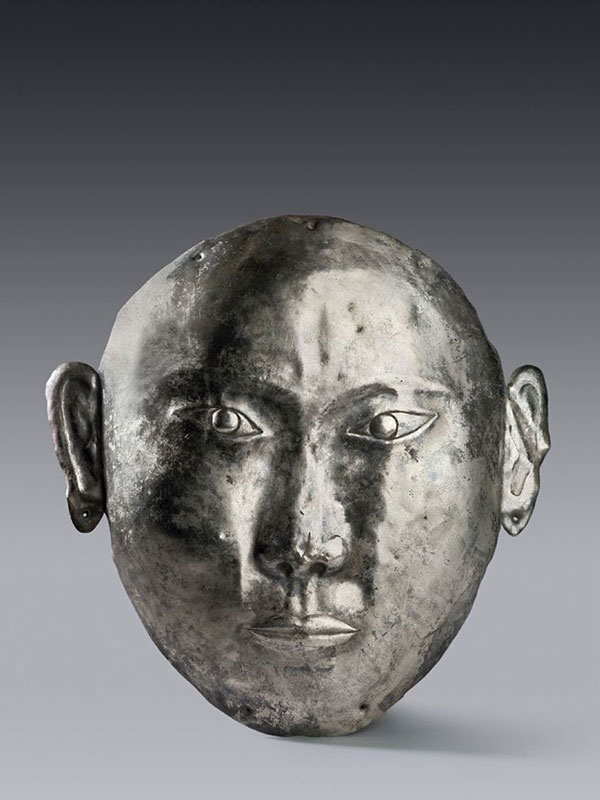 A silver funerary mask depicting a round human face, worked in the repoussé technique with strong, naturalistically portrayed features and an alert expression.  The eyes have prominent, circular pupils and are set below arched eyebrows. The straight, broad nose has flared nostrils and is set above a full-lipped, pursed mouth. Naturalistically detailed, prominent ears jut out to either side of the head. Both earlobes are pierced. At the top of the mask are three holes for attachment, and on the chin are two further holes.

Masks such as the present example are thought to be the products of shamanistic religious beliefs, and are said to accurately reflect the facial features, age and sex of the interred. The extremely life-like, alert expression of this mask is rare and serves to underline this theory. The three small holes at the top of the mask and the two holes on the chin indicate that it was probably once attached to a wire mesh, which encased the entire body of the deceased, including the head. This funerary practice is specifically associated with the Qidan (Khitan), a semi-nomadic tribe of hunters and pastoral people, who founded the Liao dynasty that governed northern China from 907 to 1125. The material used for the funerary mask was determined by the status of the wearer; copper was used for those of lowly rank, high-ranking officials were allowed to have silver and silver gilt masks, and gold was reserved for members of the imperial family.[1]  A unique gold funerary mask with silver netting still attached, excavated from the tomb of the princess of Chen and made for the burial of her husband Xiao Shaoju, is now in the Research Institute of Cultural Relics and Archaeology of Inner Mongolia.[2] A closely comparable silver mask, bearing traces of gilding and with equally prominent pupils and ears is in the Muwen Tang collection.[3]