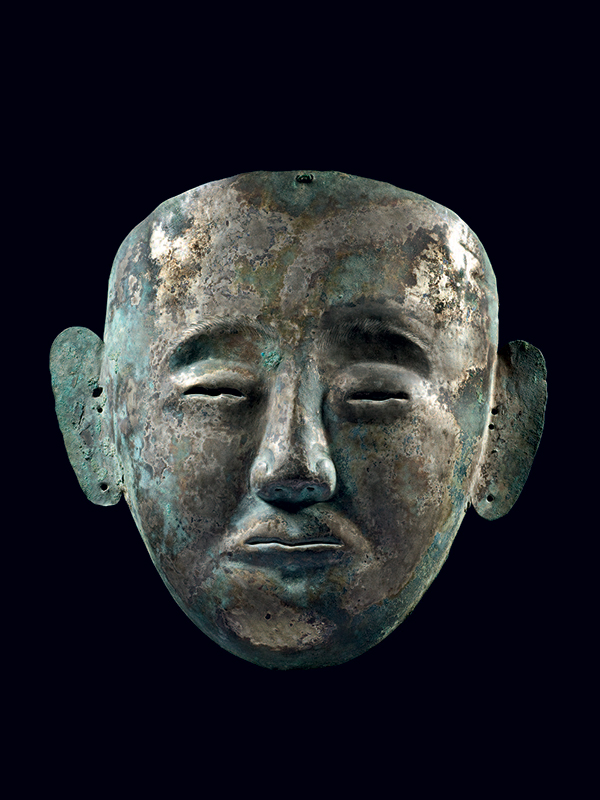 A silver funerary mask representing a human face, worked in the repoussé technique with strong, naturalistically portrayed features and a demure expression. The heavy­-lidded eyes are depicted shut and set below pronounced, arched eyebrows that are engraved with finely hatched  lines. The face has high cheekbones and a straight, broad nose set above a full­-lipped mouth.  Two prominent ears jut out at either side of the head. The earlobes are pierced. The mask is covered in a green patina, leaving relatively large areas showing the original silver finish of the metal.

Placing  a  metal  mask  on the face  of  the deceased was a  unique, probable  originally tribal, burial  custom during  the Liao  dynasty  in China. The  Liao  dynasty  was founded  by  a semi­-nomadic  tribe  of  hunters  and pastoral people named Qidan (Khitan). The material used for a funerary mask was determined by the hierarchy of the wearer; copper was used for those of lower ranking, whilst higher ranking officials were allowed to use a more precious metal such as silver and silver­-gilt. Gold was reserved for members of the imperial family.[1] A unique gold funerary mask with silver netting still attached, belonging to the Princess of Chen, is now in the Research Institute of Cultural Relics and Archaeology of Inner Mongolia.[2] A comparable gilt-­copper mask is in the Meiyintang Collection.[3]  A further comparable silver-gilt mask is in the Muwen Tang Collection.[4]