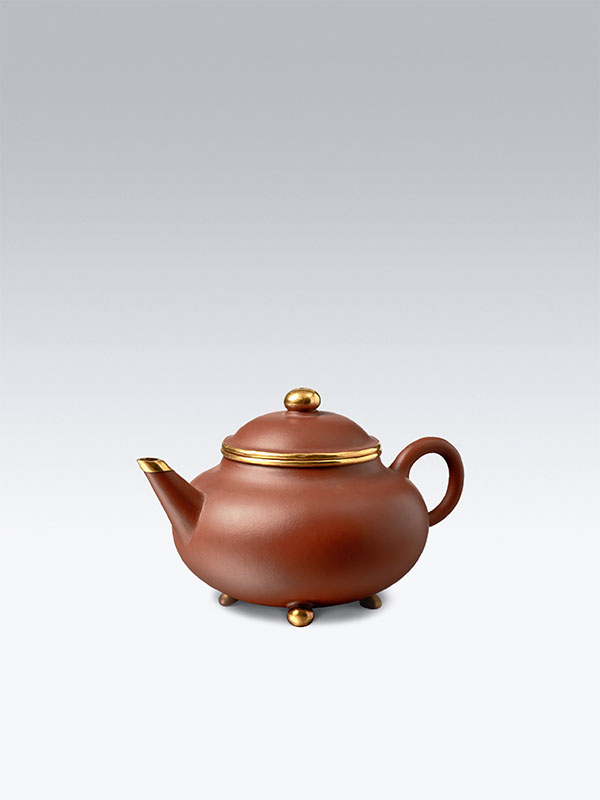 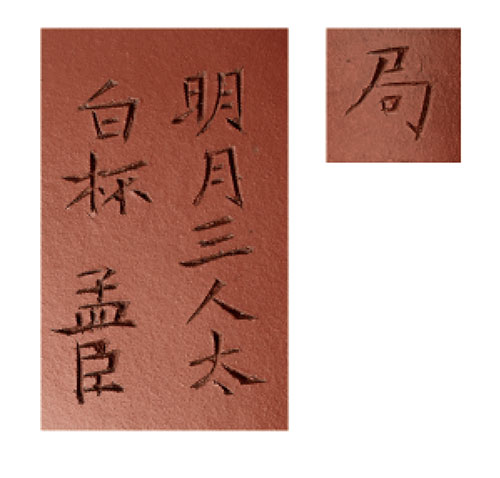 A red stoneware teapot of squat globular shape, supported on three ball feet and with a C-shaped handle, straight spout and a snugly fitting domed cover, crowned by a globular finial. The tip of the spout, knop on the lid, rims of cover and teapot and the three ball feet are all encased in gold. The lid is engraved with a two-character inscription reading gong ju, meaning ‘tribute bureau’. The base is engraved with a nine-character inscription, reading ming yue san ren tai bai bei, meaning ‘appreciating the moonlight while drinking tea’ and signed Meng Chen.

Yixing, also known as Yangxian in ancient times, was known as the pottery capital of China since the Ming dynasty (1368-1644). The clay from Yixing contains a high iron content and is therefore finely grained and highly malleable. The present teapot of orange ­red colour with a slight purple hue is made of typical clay from Yixing, commonly known as ‘purple clay’ (zi sha). Due to the rapid development of the purple clay industry, shops were established in major cities from the 19th century, commissioning pottery wares from Yixing. However, each shop had its own artists to decorate them. Meng Chen was a very famous Yixing potter; many Qing dynasty teapot makers used his name, so the signature on this teapot is assumed to be spurious. ‘Tai bai’, part of the inscription on the base, refers to the famous Tang Dynasty poet, Li Bai, or Li Bo, who was usually drunk; it is ironic to see his name inscribed on a teapot.