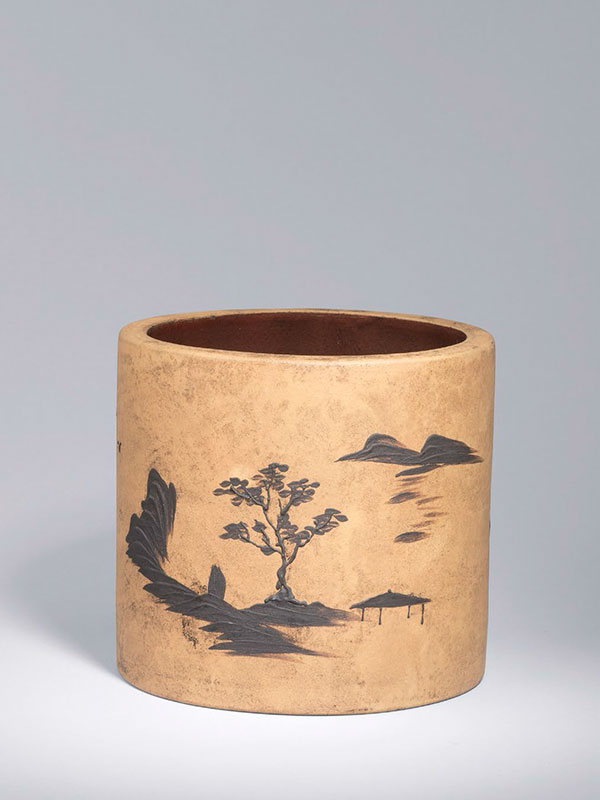 A pottery brush pot of cylindrical form, the straight sides terminating in a flat rim. The sides are painted in black on a yellowish-beige colour background with two landscape scenes: the first with a large tree growing from a rocky shore, the second with a small pavilion amongst mountains with birds flying high in the sky. The flat rim is incised with a band of ruyi cloud pattern. The interior and the base are unadorned, showing the original orange-red colour with the purple-hued pottery body. A square seal mark impressed on the base reads ‘Tie Hua Xuan Zhi‘ (meaning ‘made by Tiehua Xuan’).

Yixing, also known as Yangxian in ancient time, has been known as the pottery capital of China since the Ming dynasty (1368 – 1644). The clay in Yixing, containing a high iron content, is finely grained and highly malleable. The present brush pot of orange-red colour with purple hue is made of typical clay from Yixing, commonly known as ‘purple clay’ (zi sha). Due to the rapid development of the purple clay industry, shops were established in major cities from the 19th century, commissioning pottery wares from Yixing. However, each shop employed its own artists to decorate them. Tiehua Xuan in Shanghai was established by Dai Guo Bao (1875 – 1926) in 1913 and still exists today. Tiehua Xuan produced items noted for the excellence of their calligraphic decoration.1 A closely comparable yixing pot of cylindrical form and painted with a continuous scene, slightly larger in size and with an impressed seal of the potter Yang Jichu, is dated to the first half of the 19th century and was included in the 1986 exhibition Arts from the Scholar’s Studio. 2 Two pieces, both bearing a similar ‘Tie Hua Xuan Zhi’ shop mark in seal script and dated to the early 20th century, are in the K.S. Lo collection at the Flagstaff House Museum of Tea Ware in Hong Kong.3