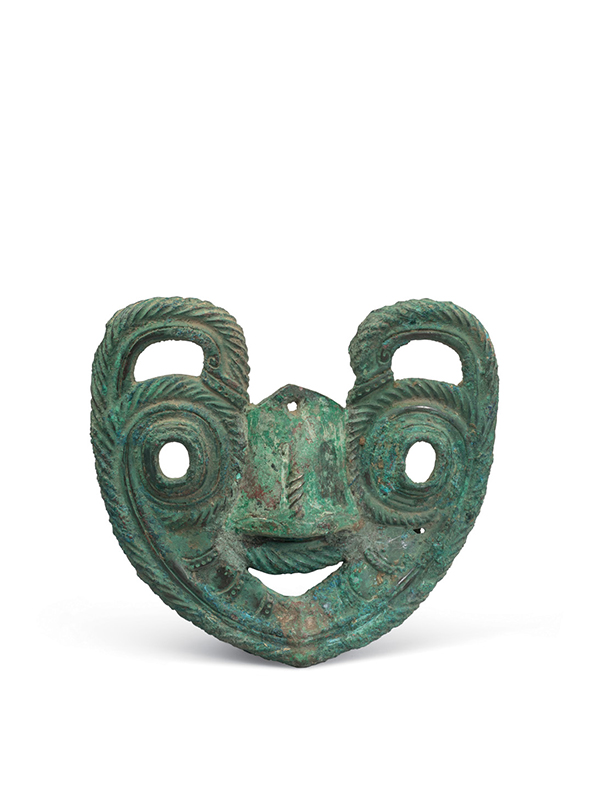 A bronze mask depicting a bovine creature, with ‘twisted rope’ borders. The bovine has large round eyes with pierced pupils, a ridged nose, large U-shaped horns and a triangular pierced mouth. The top of the head has a domed cranial extension, which is pierced with a small hole for attachment. The back of the mask has four protruding loops attached. The bronze is mostly covered in a grey-green patina with small areas of malachite and ruby encrustation.

Bronze masks, popular from the early Shang to the mid-Western Zhou dynasties, come in various shapes and have different functions. At least four known functions have been revealed in recent archaeological studies, including adornments on shields; masks attached to the front of a horse’s head; harness plates on chariots; or decorations on ceremonial or ritual tools.[1] Chai illustrates two closely comparable bronze masks, both excavated in Shaanxi province and dated to the Western Zhou dynasty, here identified as adornments on shields.[2]   The present example might have had the same function; the four loops attached to the back would have served to fasten it to a shield. Another bronze bovine mask of comparable style and function was excavated from Beijing in 1986.[3]