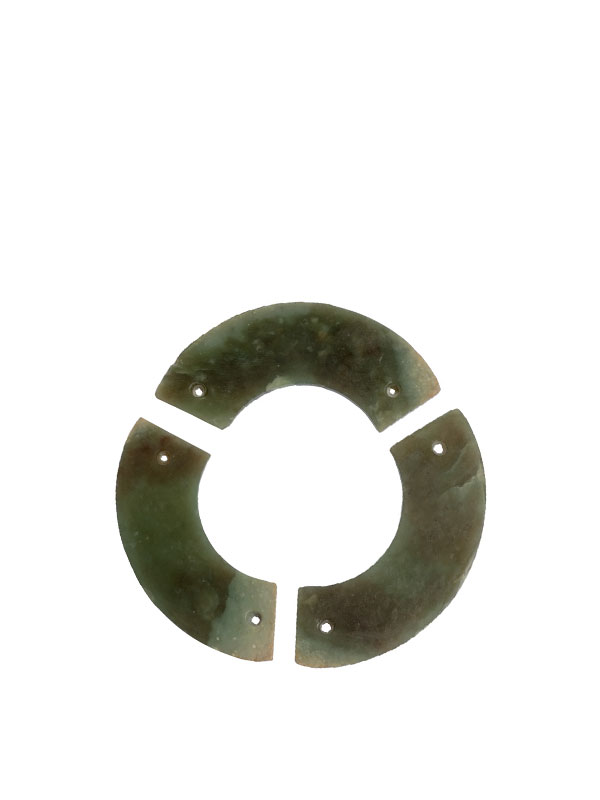 Three jade huang of arched form, each with a conical hole drilled at either end and together forming a small huan circular disc. The undecorated stone is of pale celadon tone, with some dark areas and some white calcification.

Although these three huang pendants are of different sizes, they form a perfect circle when put together, forming a complete jade huan disc. They are also uniformly coloured and marked, indicating that these three sections were cut from the same stone as a single block rather than a thin disc. The drilled holes on each huang indicate that they might have been used either to form a ring or to hang in a tier.[1] Rawson states that, “Indeed, while the rings composed of three arcs, or sets of arcs that look like parts of rings, are almost certainly Neolithic in origin, such pieces are also widely distributed in the Shang and Western Zhou periods”[2] A set of three arc-shaped pendants, larger in size but of closely comparable colour, dated to the Qijia culture (early Bronze Age culture, 2200-1600 BC), is now in the Guyuan Museum, Ningxia Hui Autonomous Region.[3] A set of three jade huang pendants is in the collection of the National Palace Museum, Taipei.[4] Forsyth and McElney illustrate a similar segmented disc and state that sets such as this occur in tombs of the Anyang phase or a little later.[5] Rawson, who illustrates a similar set from the collection of the British Museum, further explains that: “similar groups have been found among the jades of western Neolithic cultures.”[6]