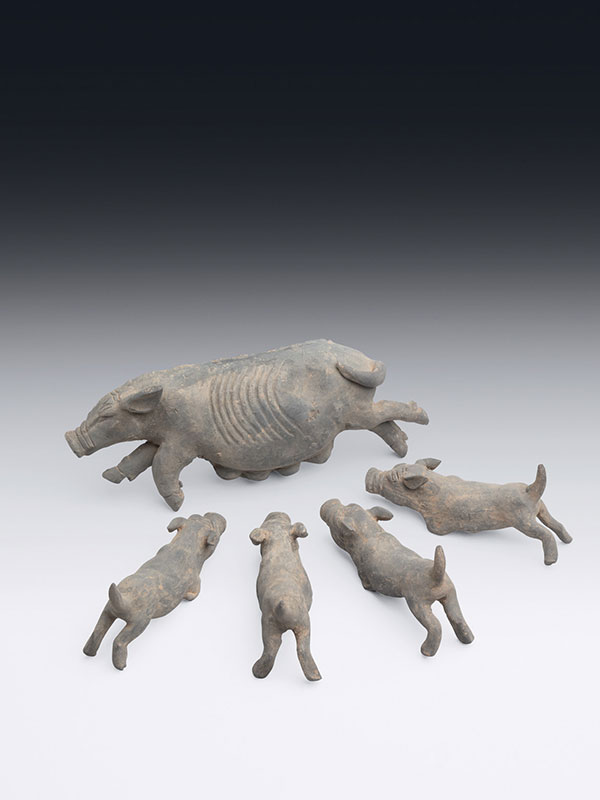 A grey earthenware model of a recumbent sow with four crouching piglets. The sow lies on one side with her legs outstretched and her tail curled up towards her back. The crouching piglets are suckling whilst lying on their stomachs, their front trotters tucked underneath their torso, and their hind legs stretched out behind them. Finely incised lines denote their heads and the sow’s protruding snout. The animals are unglazed.

The creation of pottery funerary sculpture is thought to have originated during the Shang (c. 1500 – 1028 BC) and Zhou periods (1028 – 256 BC), a practice that was adopted as a substitute for human sacrifices.[1] This custom was developed during the Han dynasty, which is well known for the variety of tomb ceramics that were produced.[2] This amusing and finely potted group of a sow with her young is rare in Han period pottery. A group of stone pigs of various sizes and dated to the Western Han dynasty was unearthed from Changsha, Hunan province in 1956.[3]   A grey pottery model of a pigsty with a pig standing in the pen, excavated from tomb no. 2 at Baozhuang in Luoyang, Henan province and dated to the Eastern Han period, is in the collection of the Institute of Archaeology, Chinese Academy of Social Science.[4] Two further comparable pottery pigsties, one simpler and dated to the Western Han dynasty and the other covered in a green glaze and dated to the Eastern Han dynasty, are both in the Meiyintang collection.[5]