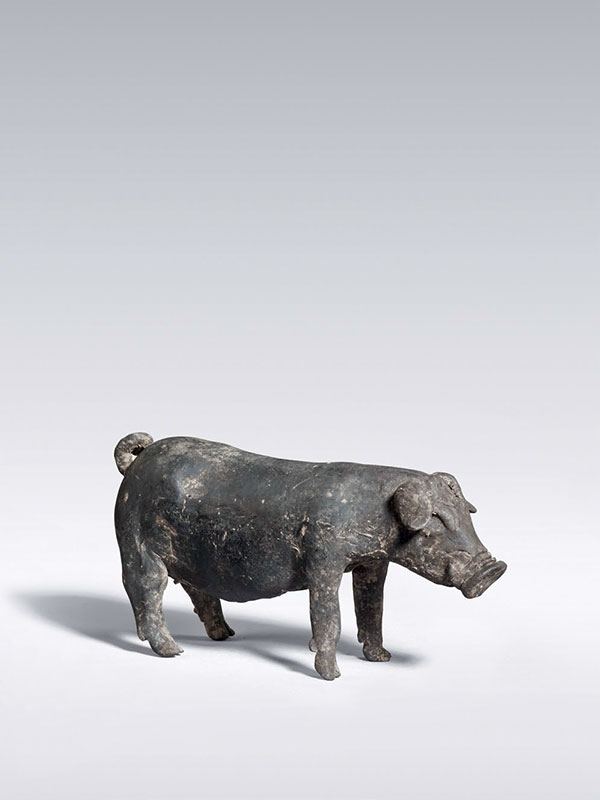 A grey pottery model of a standing pig with a long body, naturalistically depicted facing forward in an alert position, the long ears folded down and with elongated eyes, prominent snout and pointed canines. The animal has a short tail, which is curled at its hindquarters. Its four strong legs and hooves are carefully detailed. The body is hollowed. The grey pottery shows remains of burial earth.

The depiction of domestic animals such as horses, dogs, sheep, pigs and ducks is a characteristic feature of Han dynasty pottery. The pig (zhu) is one of the most important animals in the Chinese economy, where ownership of a pig was a sign of wealth, rightly earning the pig its position as one of the twelve animals in the Chinese zodiac. The Chinese character for family (jia) depicts a pig under a roof. Thus, its symbolic meaning is restricted to the important role it plays as a sign of general prosperity, wealth and overall good fortune. [1] A group of pottery pigs was excavated from the Han Yang Ling (or known as the Yang Mausoleum of Han), the mausoleum of Emperor Jin (r. 57-141 BC) of the Western Han dynasty located in Xianyang, Shaanxi province. [2] An example of an earthenware pig dated to the Han dynasty is in the collection of the Royal Ontario Museum. [3] A grey pottery model of a pigsty including a simply modelled pig, dated to the Western Han dynasty of the 1st century BC, is in the Meiyintang collection. [4]