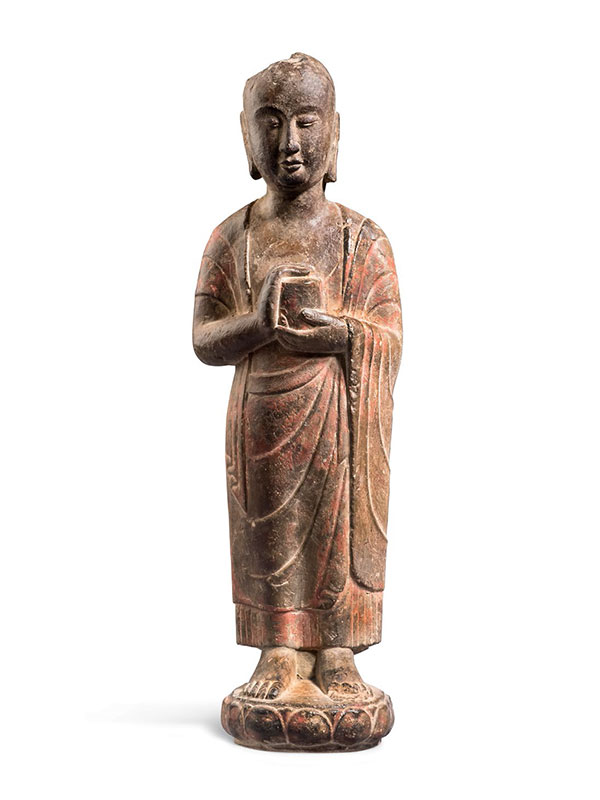 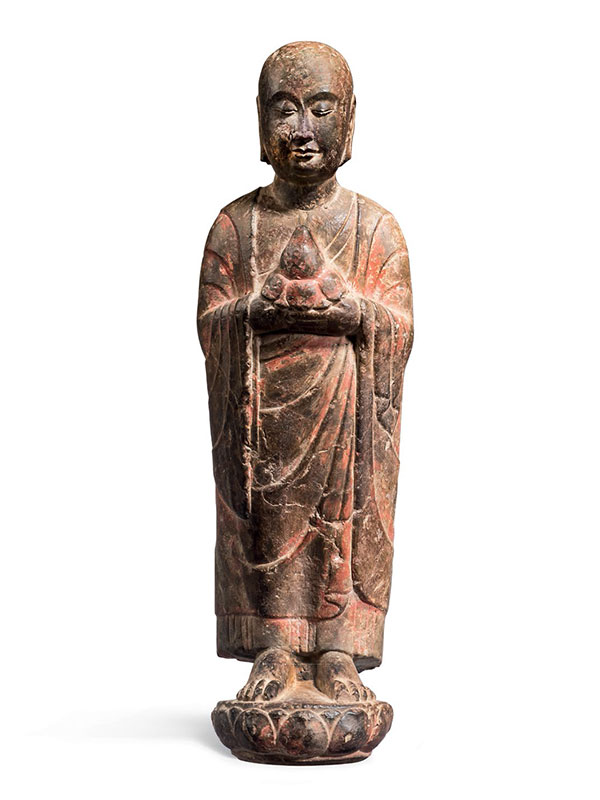 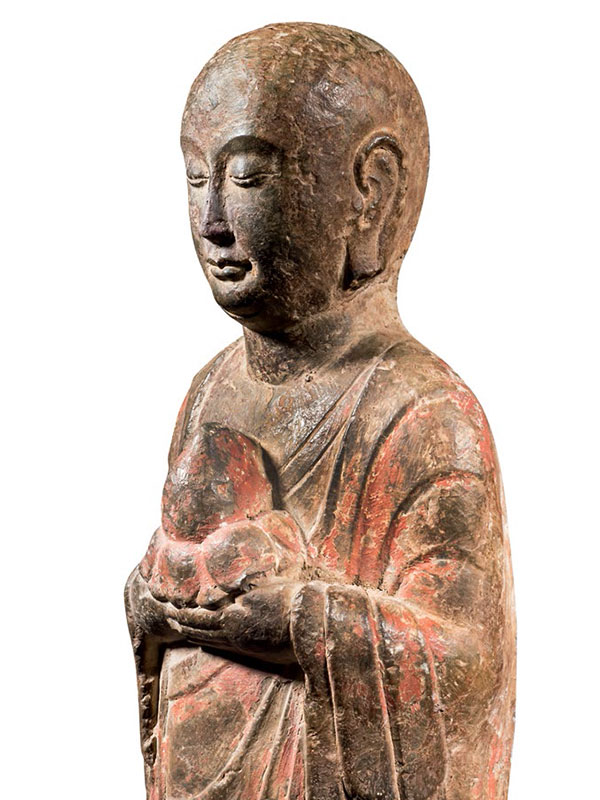 Two limestone sculptures of monks, each standing on an upturned lotus base. Both monks are dressed in layered robes: the outer robe is loosely draped, falling into elaborate and rhythmic pleats on the shoulders and at the spreading hem. Each face has a benign, compassionate expression. Each slightly rounded face has half-opened, downcast eyes under high-arched eyebrows, a strong, aquiline nose and a small, pursed mouth. The bare feet are revealed underneath the pleated hem. Both monks have their hands half-raised against their chests, one holds a cylindrical reliquary and the other holds a lotus bud. The grey stone is uniformly coloured and bears traces of reddish pigment.

These two exquisitely carved monks were once part of a large group that would have included a Buddha accompanied by bodhisattvas and guardians. After the sixth century, the Buddha was often depicted with two of his ten principal disciples; the youthful Ananda and an elderly monk, Mahakasyapa (also known as Kasyapa). Ananda, Shakyamuni’s cousin, served as Buddha’s personal attendant and was known for his prodigious memory. At the First Buddhist Council, convened shortly after the Buddha died, Ananda was called upon to recite many of the discourses, whilst Mahakasyapa came from the kingdom of Magadha, assumed the leadership of the Sangha and presided over the council. Mahakasyapa is normally carved standing to the right of Buddha inside the cave, whilst Ananda is on the left. Buddha’s ashes were divided into eight portions after his funeral, and Mahakasyapa carried a share in a reliquary to the King of Magadha. Stylistically, the type of carving and the general style of their costumes closely resemble sculptures from the Xiangtangshan Caves, Hebei province. The Xiangtangshan Caves, literally meaning ‘Mountain of Echoing Halls’, were created near the Northern Qi capital, Yecheng (now Linzhang county, southern Hebei province) with imperial sponsorship. Some pairs of closely comparable limestone sculptures of monks, dated to the Northern Qi dynasty, are still in situ at the Xiangtangshan Caves (fig.1). [1] A large limestone sculpture of Mahakasyapa similarly holding a cylindrical reliquary, dated to the Northern Qi dynasty and originally from the Southern Xiangtangshan caves, is in the Cleveland Museum of Art. [2] A further comparable marble standing Buddhist monk, dated to the Northern Qi period, is in the Aurora Foundation collection and was exhibited at the National Palace Museum, Taipei in 1997. [3]