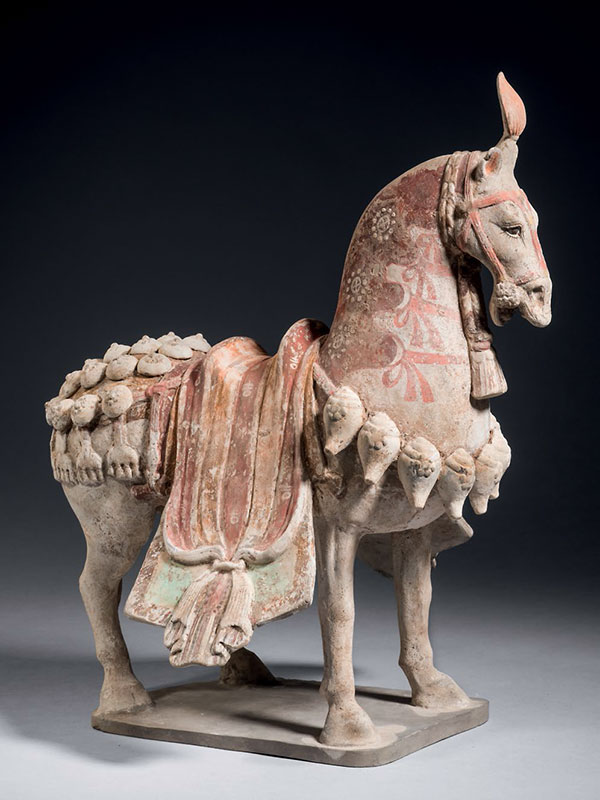 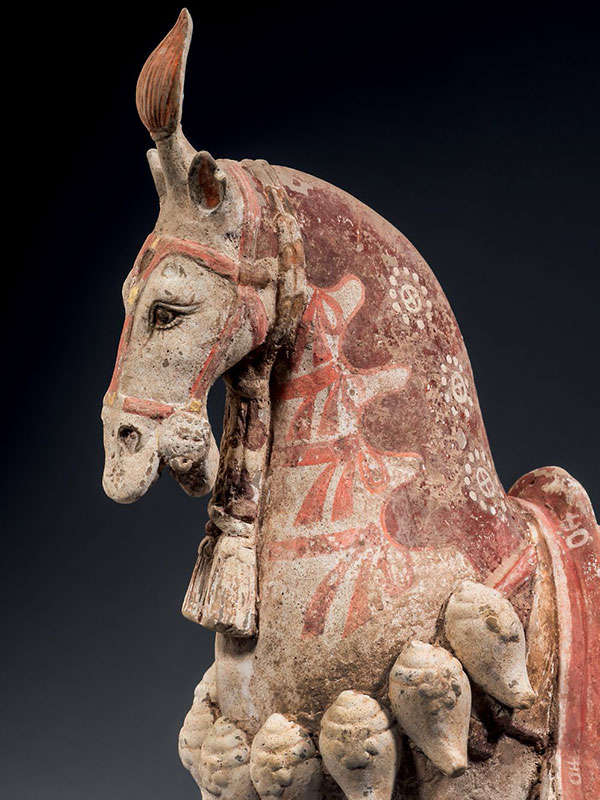 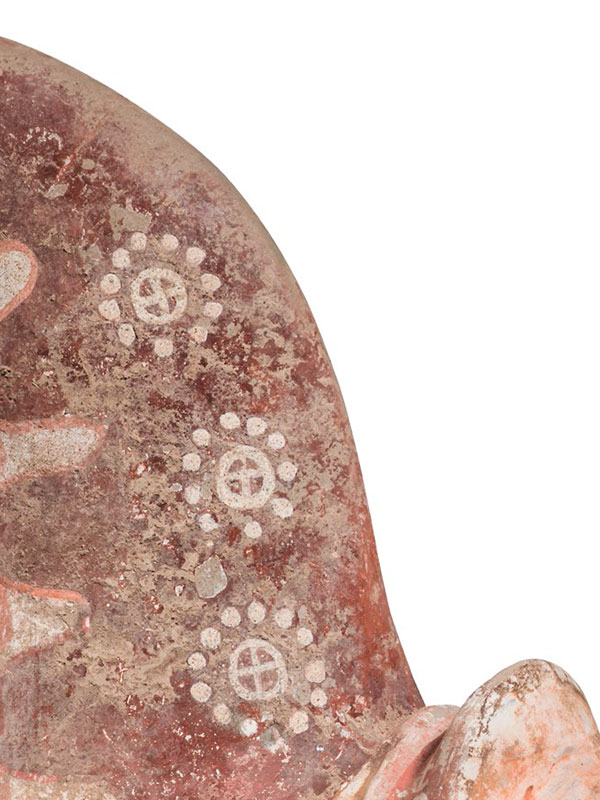 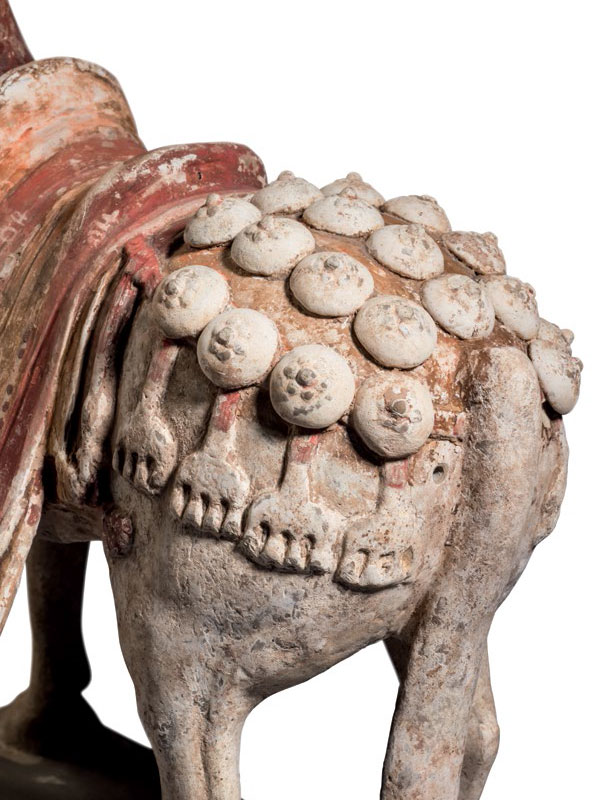 A pottery model of a horse, standing foursquare on a rectangular base with canted corners. The animal has a gracefully arched neck and its well-modelled head is slightly tucked in towards the wide chest, which is decorated with a row of large conch-shells with raised florets, each of which has a moulded flower to the top. The head is carefully modelled with an alert expression, pricked ears, flared nostrils, wide-open mouth and an upturned stiff hair finial. The head has an ornamental bridle and a double-plaited cord around the neck, which extends into a tassel that hangs under the chin. The saddle, which rests on a flared blanket, has a knotted saddlecloth thrown over it. It is held in place with straps hung with tassels and linked over its hindquarters by a leather pad with several rows of ornamental bosses. The saddlecloth is painted in red and orange and inscribed with the Chinese character Ji (meaning ’auspicious’) in creamy white pigments. The long tail is combed straight down. The mane is arranged in waves to either side of the head and picked out in bright red pigments with roundel ornaments on a cream ground, which covers virtually the entire animal and the grey pottery underneath.

This charming, exceptionally decorated and finely modelled horse is amongst the best examples of this period. In genera horses o the Northern Wei period (386-534 AD) are characterised by their stiff legs, widely projecting trapezoid saddles, powerful arched necks, broad chests and relatively small heads. After Emperor Xiao Wendi’s decree that moved the capital to Luoyang in 494 AD, the style of tomb sculptures altered abruptly, influenced by developments in painting in the southern courts. [1]     Thus from the late Northern Wei period, horses became more naturalistic and more richly decorated, continuing into the Tang dynasty (618 – 906 AD), reminiscent of styles then current in Central Asia and Persia. This type can be found from the late Northern Wei, then Eastern Wei (534 – 550 AD) and to the Northern Qi (550 – 577 AD) in tombs in Hebei and Shanxi province. A closely comparable pottery horse that shows the typical equine representations of the late Northern Wei period was unearthed from a tomb at Quyang. [2] Other Northern Wei pottery caparisoned horses of similar design are in the collection of the Rijksmuseum, [3] the Royal Ontario Museum, [4] and the Julius Eberhardt collection. [5] Elaborately caparisoned pottery horses have also been found in a number of Eastern Wei tombs, such as one recovered from the tomb of a princess of the Ruru nationality in Cixian, Hebei province and dated to 550 AD. [6] Three closely comparable Eastern Wei pottery horses with very similar decoration are respectively in the Meiyintang collection, [7] the Robin and R. Randolph Richmond, Jr. collection [8]     and the collection of Anthony M. Solomon, exhibited at Harvard in 2002 (fig. 1). [9] Three further comparable pottery horses, dated to the late Northern Wei to Eastern Wei dynasty, are illustrated by Victor Choi in Horses for Eternity. [10] A further comparable example, dated to the Northern Dynasties (439 – 581 AD) was excavated from Hebei province in 1948 and is now in the collection of the National Museum of China. [11]