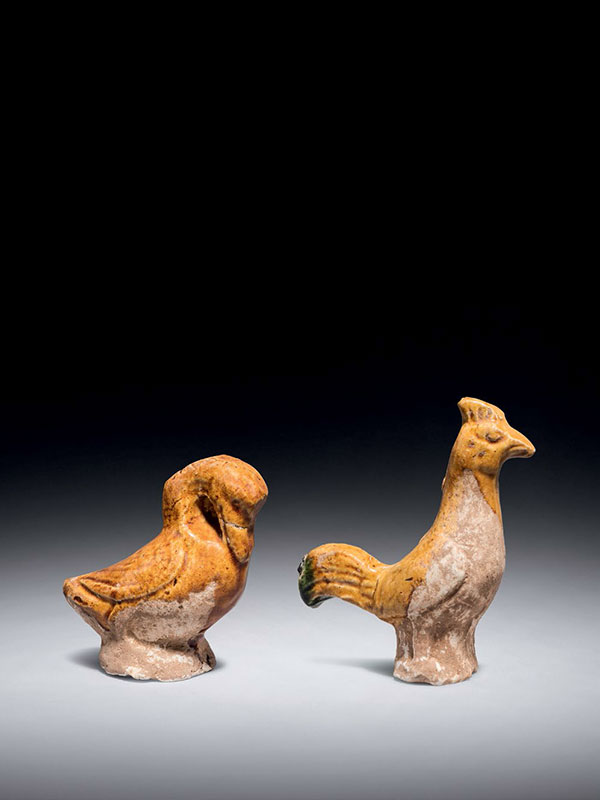 Two miniature pottery birds, one representing a standing duck, supported on a tubular base, with a long neck slightly bending down and its head pointed towards the ground, its pointed beak and feathery wings well defined. The other represents a cockerel, which is also supported on a tubular base. The exterior of both birds is covered with a layer of lustrous amber glaze, stopping unevenly around the lower part of the body, revealing the buff pottery body. The end of the cockerel’s tail is highlighted with green glaze.

Modelled pottery domestics animals, such as ducks, cockerels or rams, were common burial goods in the Tang tombs, which vividly represent daily life of middle-class people of the day. The depiction of ducks dates back at least to the Han Dynasty, and mandarin ducks (yuanyang) have been found as a motif amongst the embroidered textiles discovered in the famous Dunhuang Caves dating to the Tang dynasty. [1] Two comparable small Tang pottery ducks are in the collection of the Victoria and Albert Museum. One pottery duck, covered in creamy-yellow lead glaze, is modelled with its head looking ahead; [2] the other with a sancai glaze has its head turned back, preening its tail. [3] The cockerel is distinctive as the sole bird in the cycle of twelve animals comprising the Chinese zodiac. In Chinese folklore, cockerels are associated with the sun and are said to have the ability to scare away evil spirits. Traditionally, a white cockerel was placed on top of coffins to scare away evil spirits, while ceramic funerary figures of cockerels were placed inside tombs. [4] A closely comparable small Tang pottery cockerel, with similar sancai glaze and of comparable size and style, is in the collection of the Idemitsu Museum of Arts, Tokyo. [5] Two further comparable sancai cockerels of larger size were excavated from Luoyang city, Henan province and are in the collection of the Luoyang Museum. [6]