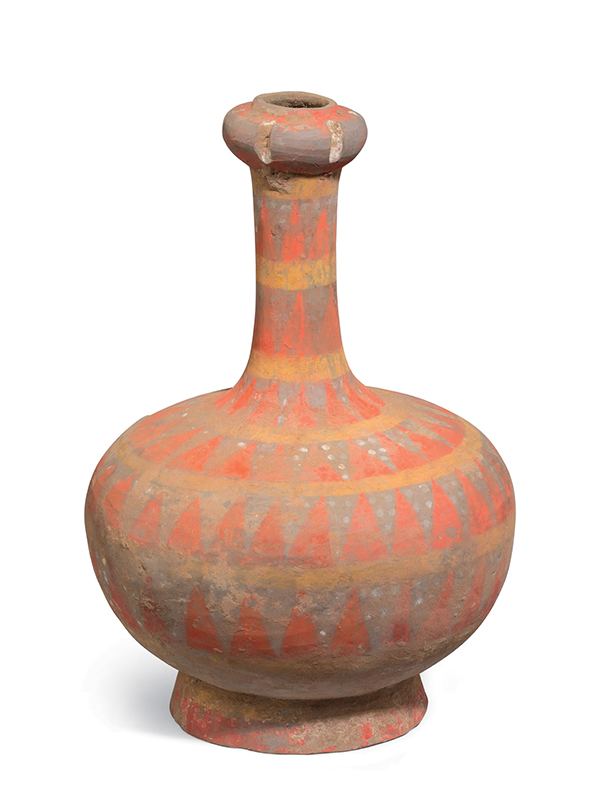 A grey pottery vase, the compressed globular body supported on a tall, tapered foot, and surmounted by a flared neck, which terminates in a bulbous, so-called ‘garlic-head’ mouth. The exterior of the vase is painted in bright red, yellow and white pigments with an overall geometric design of triangles, their tops joined by concentric circles.

For their repertory of forms, Han potters relied heavily on bronze prototypes, as can be seen in this vase, the exact equivalent of which exists in bronze. Pottery and bronze also share the same decorative motifs that they had in common with painted lacquer wares of the period. On this vase, the striking geometric design is painted in red pigments onto a grey pottery body that has already been fired. Low fired earthenware would not have been practical for everyday use as it is not watertight, and it is clear therefore that such objects have a strictly symbolic function. The design of pointed triangles in red can be seen on a group of pottery vessels which imitate archaic bronzes.[1] Examples of bronze ‘garlic head’ vases, dated either to the Qin (221 – 207 BC) or Han dynasty, are in the collection of the National Palace Museum, Taipei.[2] A black pottery vase with burnished decoration, dated to the Eastern Zhou dynasty, Warring States period (475 – 221 BC) and comparable in shape and horizontal sections of decoration is in the Meiyintang collection.[3]