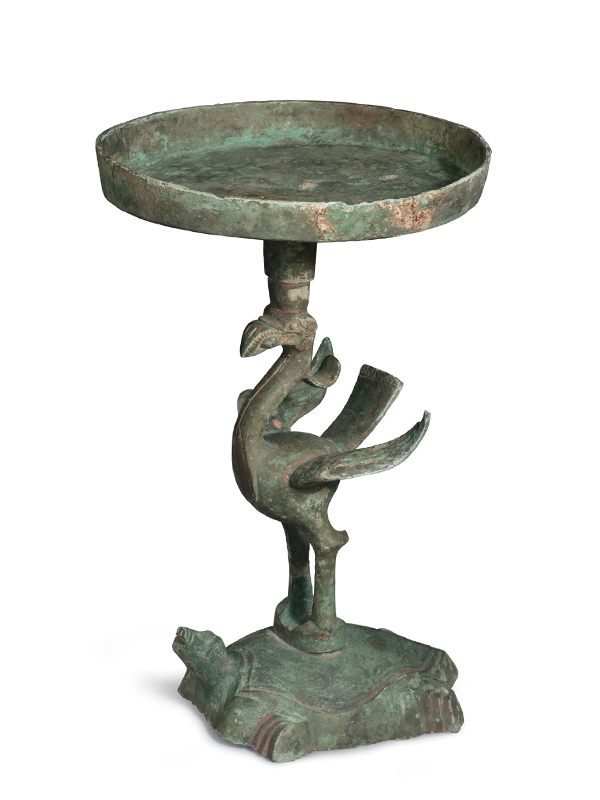 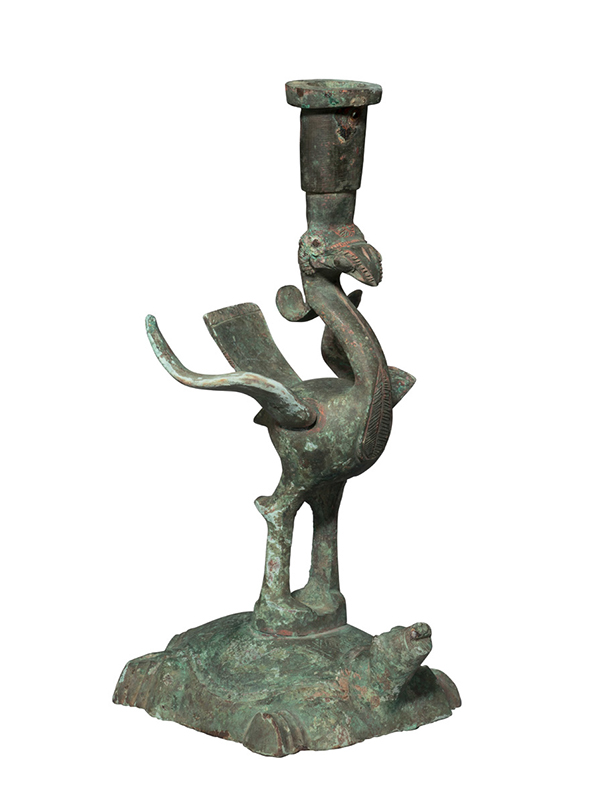 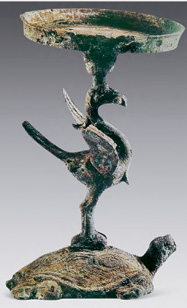 Fig. 1   Bronze lampstand supported by a phoenix on a turtle, excavated from Haiqu, Shandong province in 2002

A bronze lamp composed of a circular dish supported by a phoenix, which in turn stands on a tortoise as a base. The phoenix has its wings widely spread out and its bulging eyes and pointed beak are minutely defined. The phoenix stands on top of a large recumbent tortoise, which has its head raised up and its four feet spread out. A short section of tube is fixed on top of the phoenix’s head and interlocks with the removable circular oil dish. The bronze vessel has acquired a subtle grey-green patina overall.

. This elegantly designed archaic bronze lamp is a perfect illustration of Han dynasty bronze craftsmanship and the contemporary belief system. Both the phoenix and the tortoise are known as members of the Four Heraldic Animals or Divine Creatures (siling). The phoenix (known as Red Bird, zhuque) is associated with summer and represents the southern hemisphere, whilst the tortoise (known as xuanwu in Chinese) marks the north and symbolises winter. The combination of the phoenix and the tortoise was very popular during the Han dynasty, where the animals were often seen together, as in the present example. A very similar, almost identical bronze lampstand with a comparable design of a phoenix standing on a tortoise and with a circular oil dish, was excavated from a Eastern Han tomb at Haiqu, Shandong province (fig. 1).[1] A further comparable example is a bronze lamp composed of a phoenix standing on a coiled dragon and with a circular oil dish held in the phoenix’s beak, dated to the mid Western Han dynasty. This example was excavated in 1968 from the tomb of Prince Liu Sheng of Zongshan (c. 165 – 113 BC) from Lingshan Mancheng County, Hebei Province and is now in the Hebei Provincial Museum.[2]