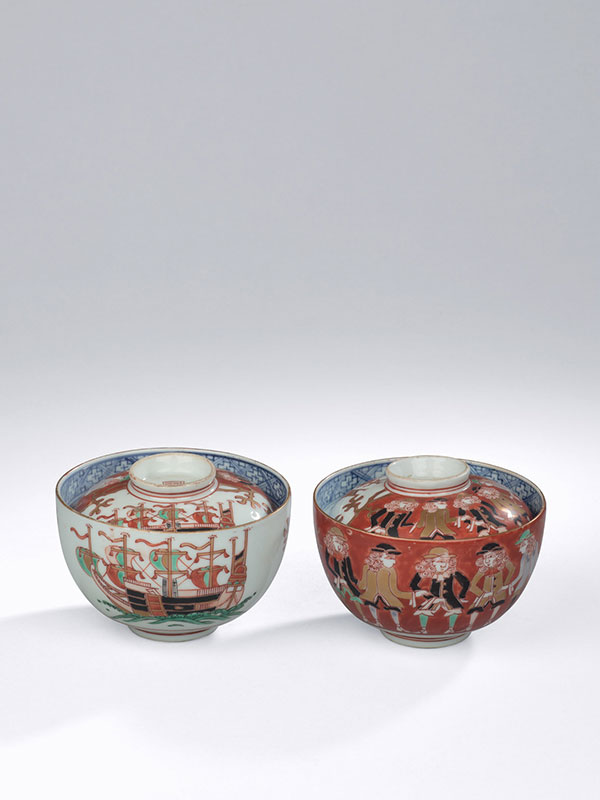 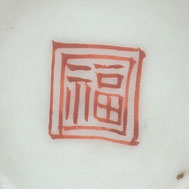 A pair of porcelain bowls and covers, each decorated on the exterior with a row of five Dutchmen wearing buttoned tunics over knickerbockers, long curly wigs and brimmed hats, all in coloured enamels on a bright red ground and flanked on either side by branches of coral. On the opposite side a tall ship on crested waves is depicted. The decoration is repeated on the knopped cover. The interior of both bowls and covers is painted in underglaze blue with a central floral roundel and a key-fret pattern around the rim. A square seal mark in overglaze red enamel is painted inside the knop.

These so-called ‘black ship’ Arita porcelain bowls and covers depict Dutchmen or ‘Ranjin’ in Japanese. During the Edo period Dutch trading ships became likened to Takarabune (ships of good fortune) and Dutch people likened to gods of good luck due to the wealth they brought to local traders. This unusual symbolism was often reinforced with the inclusion of local motifs, such as the two branches of coral, which are visible on the bowls and on the lids, that further celebrate happiness and good fortune for the domestic household. Such unusual examples of Arita porcelain clearly illustrate early exchanges between Japan and the West. Two covered bowls, of which one is very similar to the present examples, are in the collection of the National Gallery of Victoria in Melbourne, Australia.[1]   A double-gourd vase with a very similar design is in the Kurita Museum in Ashikaga City, Japan.[2]