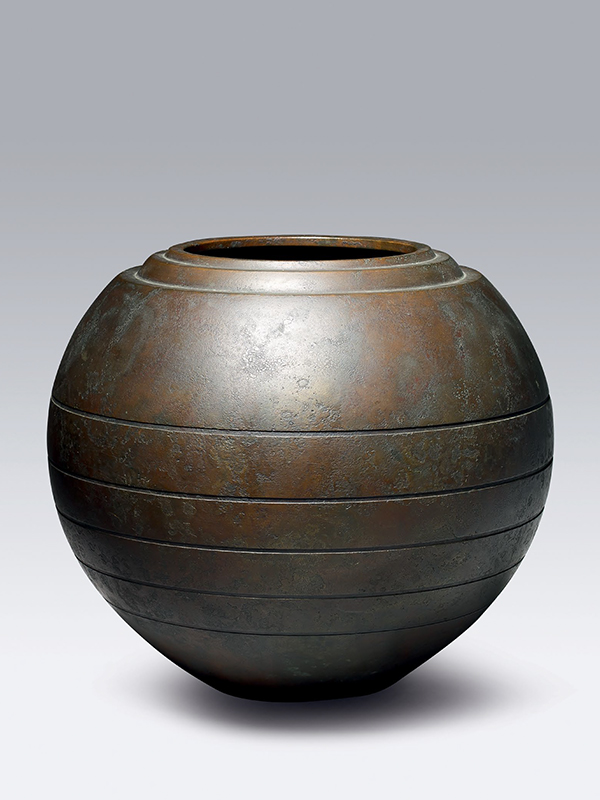 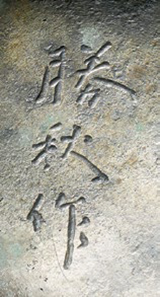 A bronze vase of conventional, spherical from, the rounded sides left completely plain with the exception of five horizontal lines, engraved along the body.  The wide-open mouth is set slightly back. The bronze is covered in a pleasant, mid-brown patina.  The base is signed by the maker: Katsuaki saku (made by Katsuaki).

The artist of this vase, Toyoda Katsuaki (1897 – 1972), was born in Kurume City, Fukuoka prefecture.  He studied metal casting at the Tokyo University of Fine Art and continued his study under Tsuda Nobuo at the same university, graduating in 1923. In the following year 1924, he was appointed assistant professor at the Tokyo Koto Kogei Gakko (Tokyo Higher School of Arts and Technology In 1926 he contributed to founding an important group called Mukei (Formless) with like-minded emerging artists. In 1927, he first exhibited at the 8th Teiten exhibition and exhibited widely at the Teiten, Bunten, and Nitten exhibitions. In 1935, together with Takamura Toyochika, he was one of the founding members of the important group Actual Applied Arts Association (Jitsuzai Kogei Bijutsukai) whose ethos was Function equals Beauty. In 1942, he returned to his home town Kurume City and set up an artistic community Akasaka Toen Studio, as well as contributing as the head of the Kyushu branch of the National Institute of Advanced Industry and Technology (Tsusan-sho Gijutsu-cho Kogei Shido-sho). His works can be found at MOMAT, Tokyo, and the Fukuoka Prefecture Art Museum etc.