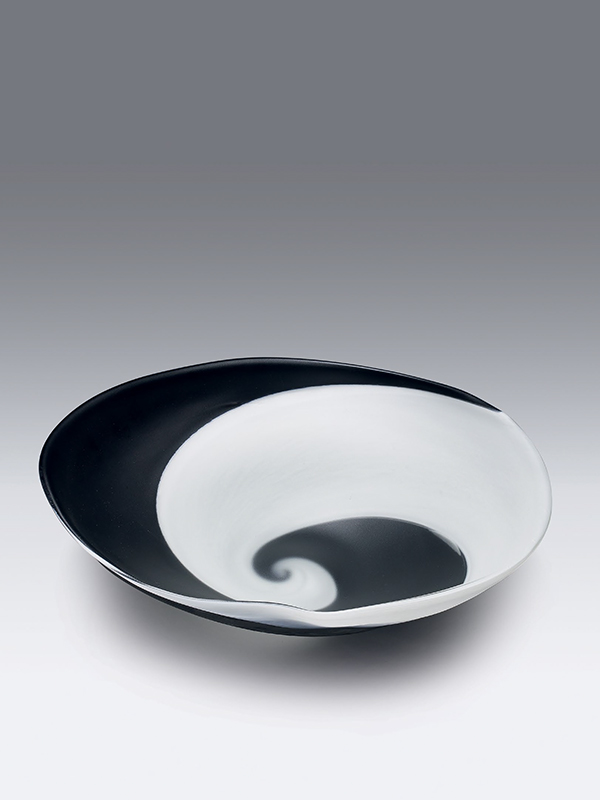 A handblown glass bowl, with wide, everted sides and supported on a small ring foot.  The bowl is executed in white and black glass with a yinyang type of decoration. The base is engraved with the signature of the artist and retains its original wooden box, tomobako, signed by the artist.

Glass was basically foreign to the Japanese, something that had no roots in indigenous culture.  New glass in Japan was initially dominated by two artists: Hisatoshi Iwata and Kyohei Fujita. Hisatoshi Iwata (1925 – 1994) was born in Tokyo where he also passed away. He graduated from the prestigious Tokyo School of Fine Arts in 1950.  Generally known as Iwata Kuri, he worked with his father Iwata Toshichi in the Iwata glass studio. He developed a distinctive style of his own whilst keeping in the Japanese tradition. He is revered in the Japanese glass world not just because of the breadth of his work and the impact he made artistically, but also because of his support and development of art glass exhibitions and education.  Many of Japan’s late 20th century and contemporary artists trained with him at Iwata. He participated in all the major exhibitions in Japan. His works of art are in the collection at the Corning Glass Museum in Massachusetts and in the Metropolitan Museum of Art in New York.