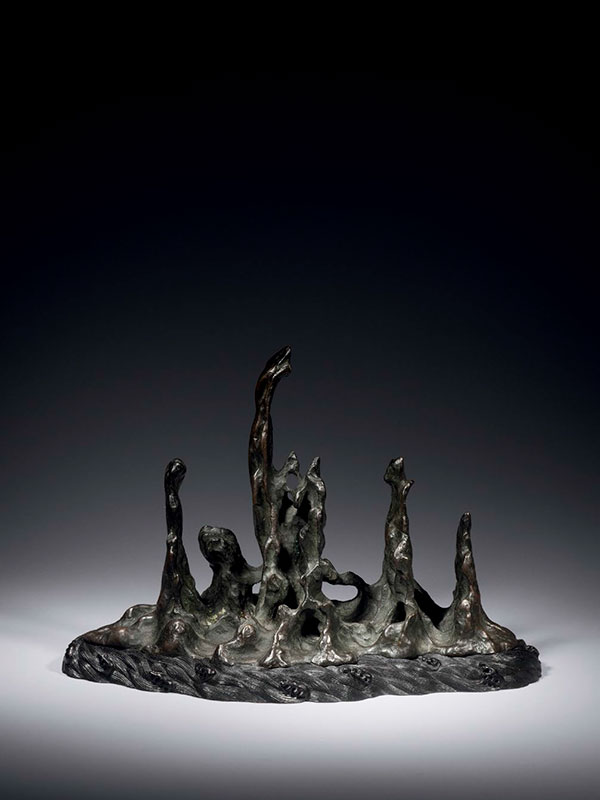 A heavy and large bronze sculpture or brush rest cast in a form of a mountain with five peaks, supported on a separate hardwood stand. The mountain has a stylistic, rocky appearance, with elongated, slender peaks. The tallest peak is in the middle and flanked on either side by lower peaks, each vividly swelling to steep inclines over cavernous valleys.  The bronze has an even, dark brown patina. A two-character mark reading Cang Yun (literally meaning ‘hidden cloud’) is engraved on the back of one of the peaks. The hardwood stand is carved around the sides with a wavy pattern.

This impressive and solidly cast bronze brush rest or sculpture is fashioned in the form of five peaks, symbolising China’s Five Sacred Mountains of Daoism: Taishan in Shangdong province in the east, Hengshan in Hunan province in the south, Huashan in Shaanxi province in the west, Hengshan in Shanxi and Hebei provinces in the north, and the Songshan in Henan province, which represents the ‘peak of the centre’. Five-peaked mountain bronzes were commonly used as brush rests during the Ming and Qing dynasties, although most are in a smaller scale compared to the present example. The two-character mark Cang Yuan is a private collector’s mark, which is less common than a reign mark. A comparable bronze brush rest of similar five-peaked mountain form, slightly smaller in size and dated to the Ming dynasty, is in the Robert H. Clague collection at the Phoenix Art Museum.1 Another much smaller bronze brush rest inlaid with silver wire, comparable in form and also dated to the Ming dynasty, 16th – 17th century, is in the collection of the Victoria and Albert Museum.2