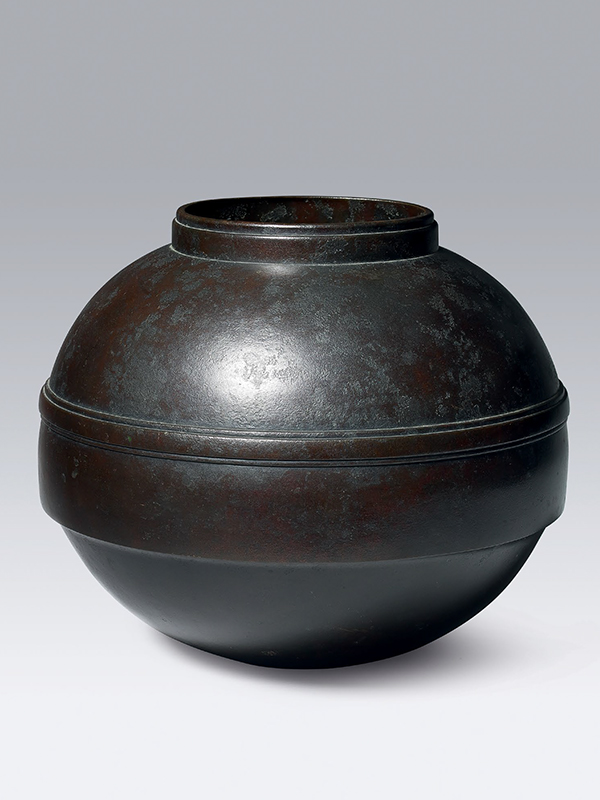 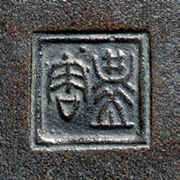 A bronze vase of spherical form, the rounded sides rising from a short foot.  The vase has a raised band applied to the centre, which consists of a broad centre section with a smaller band on either side. The stepped neck is short and straight.  The vase has an even, dark chocolate-brown patina.  It is signed on the base: ‘Toyochika’ and retains its original wood storage box, tomobako, signed by the artist and with his seal.

One of the most prolific metal artists of his time, Takamura Toyochika (1890-1972) was born in well-known artistic family. He studied metal crafting under Tsuda Daiju (1875-1946) and together with him was instrumental in setting up in 1926 the innovative and progressive craft organization called Mukei (‘Formless’) to promote the ideal and free style art and crafts made by hand. In 1933 Toyochika was appointed professor at the Tokyo School of Fine Arts in metal crafting.  He went on to set up an organization in 1935 called Jitsuzai Ko¯gei Bijutsu.kai (Real Craft Art Association), based on the functionalist constructivist works of the Bauhaus in Germany, aiming to modernize crafts using traditional techniques.  In 1964 he was awarded the status of Important Intangible Cultural Property (Living National Treasure). He held many distinguished positions as committee member, jury, judge and president at the Teiten, Shin-Bunten and Nitten exhibitions. Apart from metal-craft, Takamura Toyoshika also enjoyed tanka (short Japanese verse) poetry.