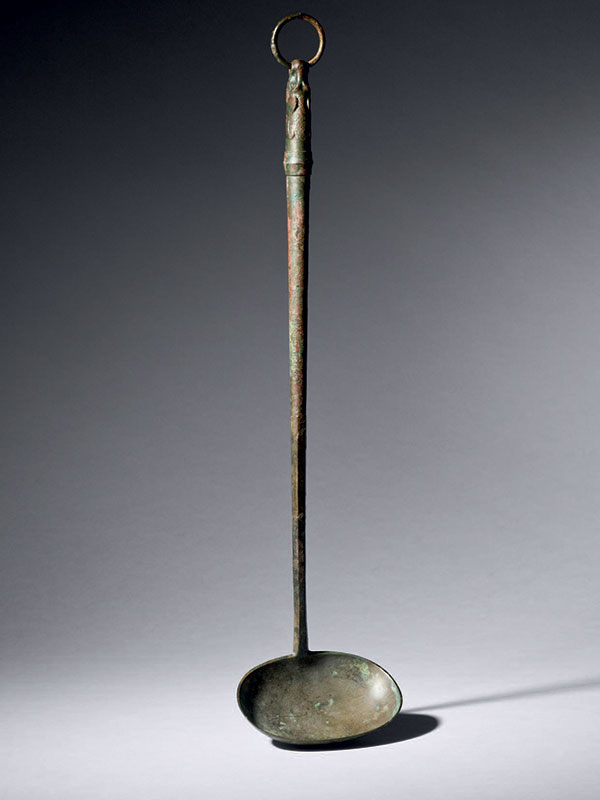 A bronze wine ladle with an oval-shaped bowl and a long handle terminating in a dragon-head. The part of the handle closest to the bowl is angular and it gradually becomes rounded, ending in a raised band. The band extends into a dragon.head with flattened ears and bulging eyes cast in relief, and grasps a loop in its snout. The ladle is covered in a green patina that has malachite inclusions all over.

The unusual dragon-head decoration of this bronze ladle suggests that it might have been made for a family of high status during the Western Han dynasty, perhaps one that had a direct royal link. A closely comparable but slightly smaller Western Han bronze ladle with its handle terminating in a dragon head was excavated from the tomb of the King of Chu at Shizishan in 1994-5, and is now in the collection of the Xushou Museum, Jiangsu province. It was found in a chamber identified as a kitchen, together with three other wine ladles of similar design inside an earthenware cauldron (fu).[1] A few other similar ladles were found in the royal tomb of the Nanyue King in Guangzhou province, and are in the collection of the Museum of the Western Han Dynasty Mausoleum of the Nanyue King.[2]