Giltbronze model of a silkworm 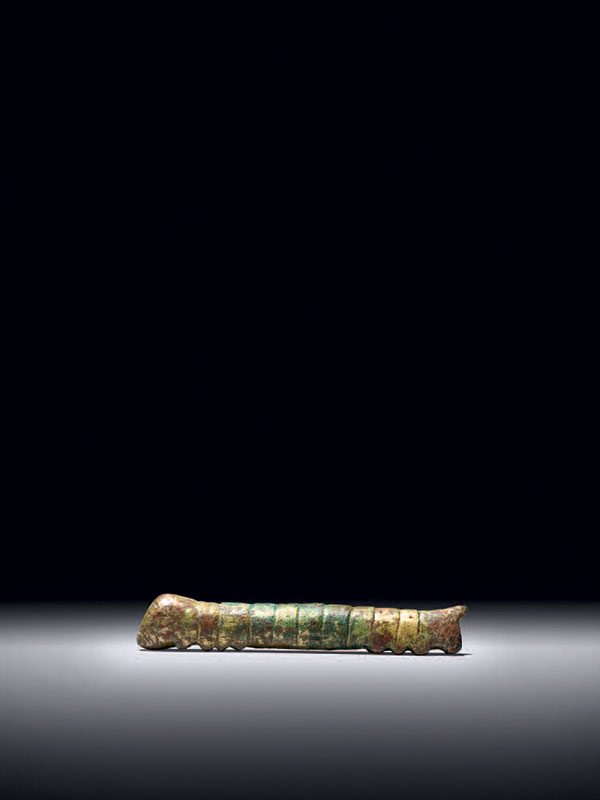 A giltbronze model of a silkworm, its segmented body realistically modelled with rounded head, tail horn and eight pairs of suction pads underneath. The bronze is covered in a thick layer of gilding, which has partially oxidised and acquired a green and red patina in places.

Silkworms were depicted in stone and pottery from the Neolithic period onwards, and the worship of the silkworm spirit can be traced to the Shang dynasty (16th century BC – c. 1046 BC), when the silkworm was first domesticated. During the 3rd century the spirit of the silkworm became personified in the form of the Empress Xiling, wife of the so.called ‘Yellow Emperor’, who is considered China’s first sericulturist with her husband as China’s first agriculturist. By then the spirit of the silkworm was worshipped in a special ceremony officiated by the Empress each year during the second half of the third lunar month with offerings of mulberry leaves and woven silk at a special altar set up in the silkworm temple or palace.[1] Models of silkworms in semi.precious stones such as jade are known from the Western Zhou dynasty (c. 1050 – c. 900 BC), indicating that throughout the ages this producer of silk was regarded with respect.[2] A closely comparable giltbronze silkworm was excavated from Shiquan county, Shaanxi province in 1984, and is now in the collection of the Shaanxi History Museum.[3] Two further comparable giltbronze silkworms, both dated to the Han dynasty, are respectively in the collections of the Asian Civilisations Museum, Singapore[4] and the Minneapolis Institute of Arts.[5]