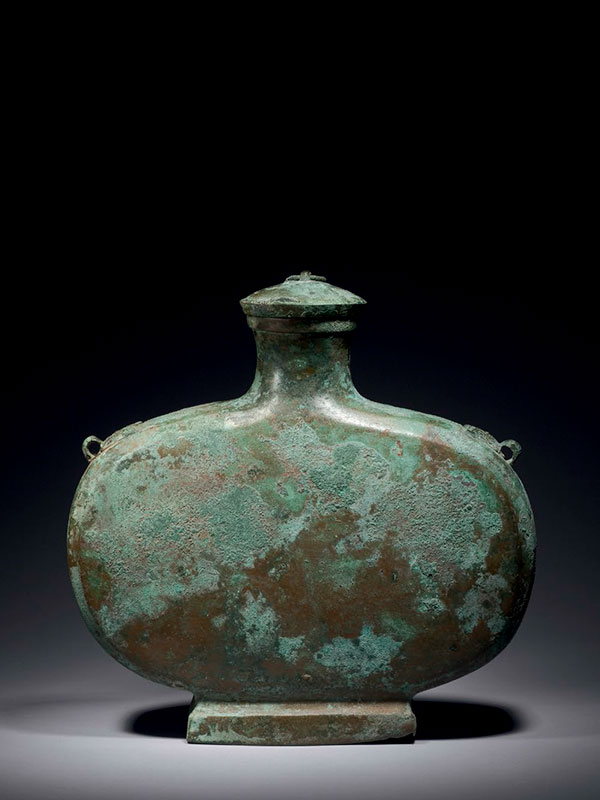 A bronze container for wine, bian hu, the flattened, oval-shaped body supported on a stepped foot of square section and surmounted by a round neck which terminates in a lipped mouth. Each shoulder of the narrow sides has a taotie mask in relief attached. The domed lid has a loop ring. The surface of this well-preserved vessel is covered in a green patina that has malachite inclusions all over. The base is cast with an unidentifiable two-character mark.

Bronze wine vessels of this flattened, oval shape, known as bian hu (meaning ‘flattened jar’) in Chinese, are found from as early as the Spring and Autumn period (770 – 476 BC), remaining popular until the Han dynasty (206 BC – 220 AD).1 A Warring States period bronze bian hu, unearthed in 1977 from the tomb of King Cuo of the Zhongshan State, contained an alcoholic drink, further proving the function of this type of vessel at that time.2 Two examples similar in shape and with taotie-mask handles on the sides, one dated to the Warring States period (475 – 221 BC) and the other dated to the Han dynasty (206 BC – 220 AD), are in the collection of the National Palace Museum, Taipei.3 A further comparable example of similar size and shape, dated to the Qin dynasty (221- 206 BC), was excavated from Shanxi province in 1973 and is now in the collection of the Archaeology Institution of Shanxi Province.4