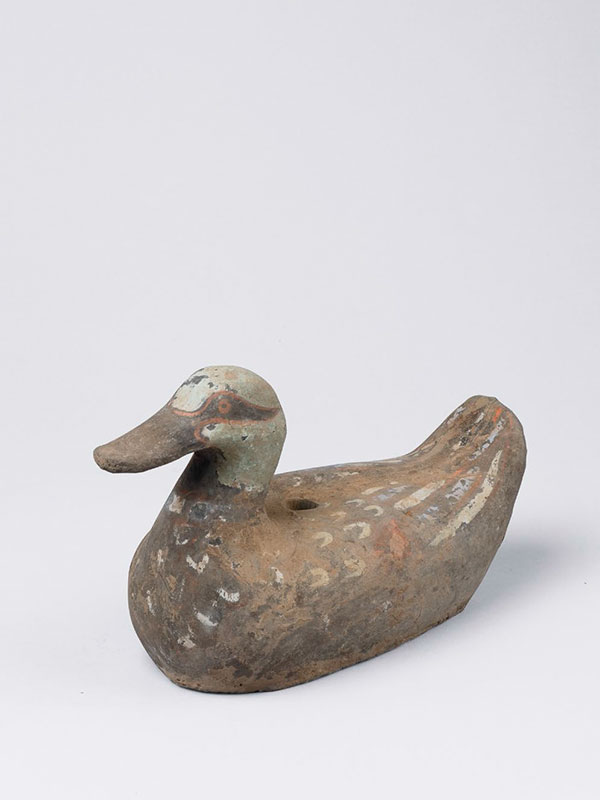 A pottery model of a duck, naturalistically depicted facing forward.  The bird has a flat black beak and stylistically painted eyes that are outlined in red against a white background. The body is decorated in detail with feathers in white, red and light purple colours. In the middle of the back a hole is drilled for firing purposes. The body and the base show some remains of burial earth.

The depiction of domestic animals such as horses, dogs, sheep, pigs and ducks is a characteristic feature of Han dynasty pottery. The lifelike depiction of this alert duck is charmingly rendered and lends the animal instant appeal. The colour arrangement of this pottery duck, in colours on a black background, resembles Han dynasty lacquer wares.  A lacquer ladle in the form of a duck, excavated from a Western Han tomb, is comparable in the painted decoration.1 A pair of painted pottery ducks, closely comparable in size and style, and dated to the 1st century BC or 1st century AD of the Han dynasty, is in the Meiyintang collection.2  A pottery standing duck covered in green glaze, similar in size and dated to the Han dynasty, was excavated from the Xian city and is now in the collection of the Shaanxi History Museum.3