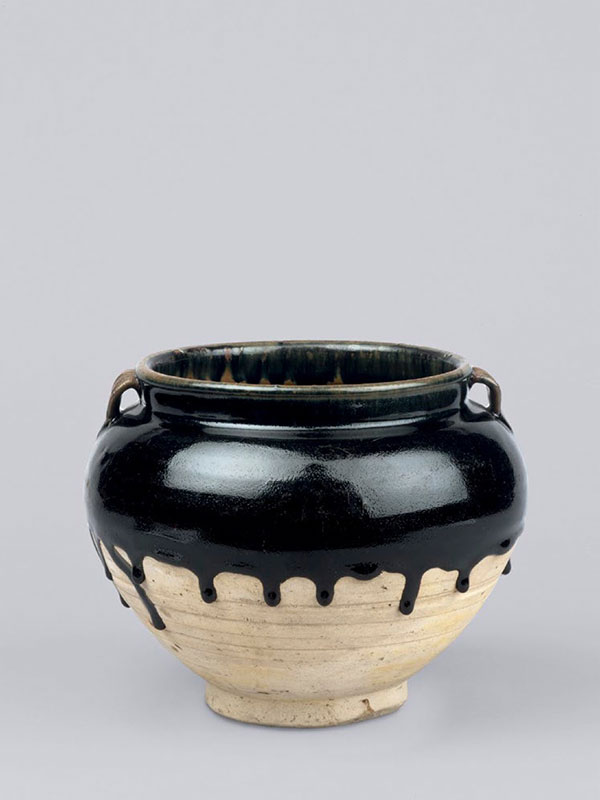 A large stoneware jar, the rounded body supported on a short, flared foot and rising to a lipped rim. The short neck has two ribbed loop handles connecting the rim to the shoulder. The upper part of the exterior of the body is covered in a thick glossy black glaze, which stops in an uneven line about half way down the body, where the glaze trickles down in places like teardrops. The interior of the body is covered in an opaque brown glaze, with three irregularly shaped sand marks in the middle. The lower part of the body and the foot are unglazed, revealing the coarse-grained buff stoneware body.

This fascinating, well-preserved black-glazed jar is a fine example of Cizhou-type stoneware, and was possibly produced at the Guantai kiln in southern Hebei province. The Guantai kiln began making stoneware in the late Tang dynasty (618 – 906), and was well-known for the various types of wares that it produced – including ribbed black wares such as the present example.[1]  A very similar, almost identical black glaze stoneware jar of the same size and shape was excavated from the Guantai kiln.[2]  Another closely comparable stoneware jar, slightly smaller in size and with a more controlled black glaze covering the upper part of the body is in the Yuegutang collection in Berlin.[3]  A much smaller black glazed jar with two loop handles, dated to the Northern Song dynasty, is in the Meiyintang collection.[4] Similar Cizhou-type black glazed jars were still being produced later during the Yuan dynasty (1279 – 1368), but they tend to have a greyish white body, such as an example excavated from Tianjin in the collection of the Center for Preservation of Cultural Heritage, Tianjin.[5]