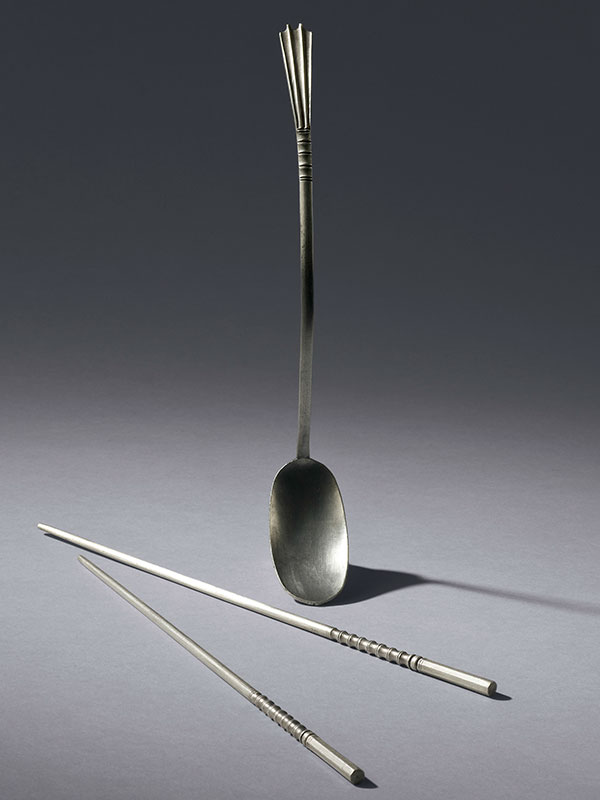 A pair of silver chopsticks and a matching silver spoon. Each top of the chopsticks is of octagonal shape, underneath which it has a section resembling a length of bamboo.  The spoon has an oval, paddle-like bowl and a long curved handle, which is engraved with five horizontal lines at the top and splays out into a flared, two-point end. Both the chopsticks and the spoon are engraved with two characters, zhao zong, whilst the spoon bears an extra character, da (‘big’) on the back of its upper section.

Silver chopsticks made to resemble bamboo stems were in fashion in southern China from the late Tang dynasty (618 – 906), such as examples discovered in Jiangsu province and in the Muwen Tang collection.[1]  However, the present examples, with polygonal tops and inscribed with their owner’s name (Zhao Zong), are more likely to be made later on in the Song dynasty. A number of closely comparable silver chopsticks with hexagonal tops and similar in the design resembling a length of bamboo, each inscribed with a character reading either ren (‘merciful’) or de (‘virtue’), were discovered in a Southern Song hoard in Le-an county, Jiangxi province in 1977.[2]  A silver spoon of similar size and decoration to the present one was also unearthed in the same hoard.[3]