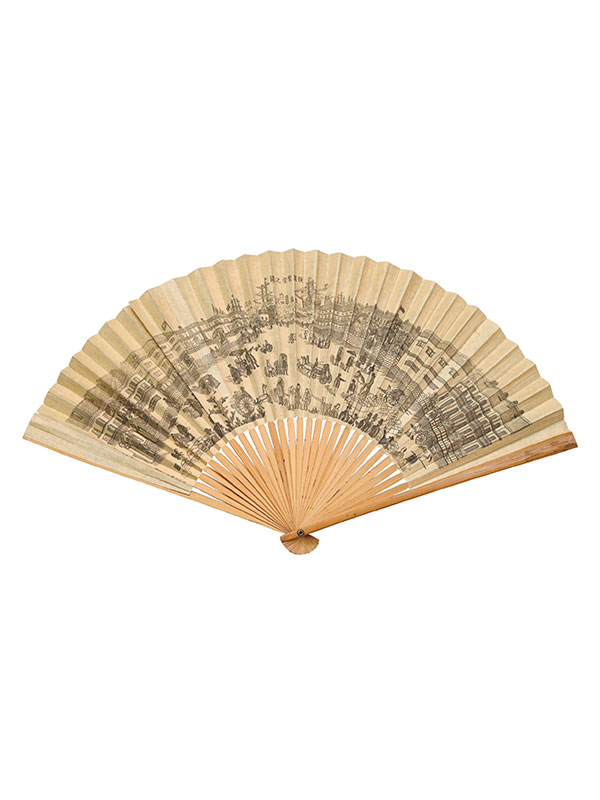 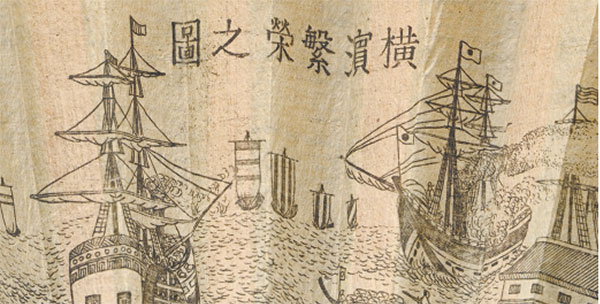 A paper and bamboo folding fan, showing Asians and Europeans in a street setting in Yokohama, with ships in the background. The Europeans are engaged in various activities, including horse riding. The Asians are engaged in more menial activities, such as pulling heavily laden carts. The scene is bordered by elaborate brick buildings, one of which sports a Union Jack flag. There are three inscriptions on the fan. The inscription at the top reads: 横滨繁荣之图 which can be translated as “Flourishing Scene of Yokohama”. Two inscriptions feature on the left hand side; the one at the bottom reads 福富淡水画图鉄筆 which translates as “Drawn and Printed by Huku Tomi Tann Sui” and the one at the top reads 鳥四上藤林藏 which translates as “Tori Shi Jyou Huji Bayashi Collection”.

Yokohama is the capital city of Kanegawa Prefecture and the second-largest city in Japan by population. It is situated on Tokyo Bay, south of Tokyo, in the Kanto region of the main island of Honshu. Yokohama was one of the cities to open for trade with the West following the 1859 end of the policy of seclusion. In the Meiji period, Yokohama became the first foreign trading port Yokohama developed rapidly as Japan’s prominent port city following the end of Japan’s relative isolation in the mid-19th century and today remains one of its major ports.