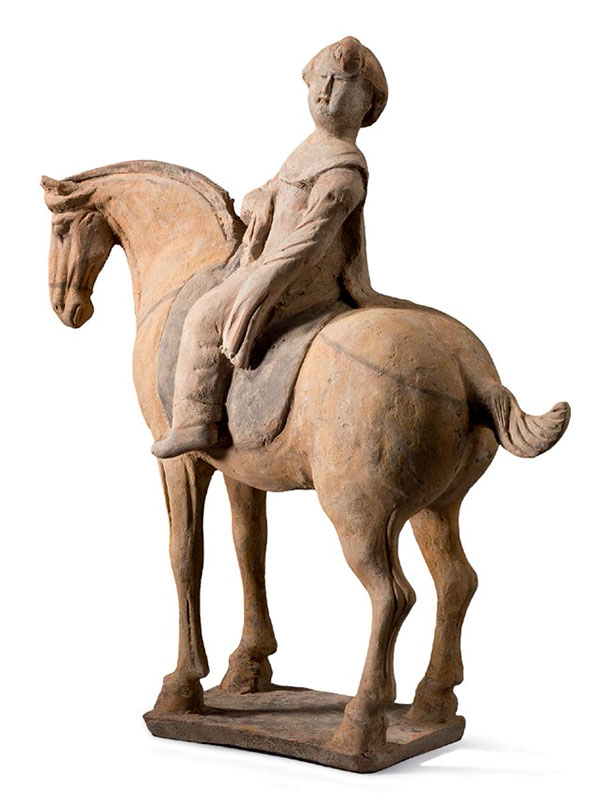 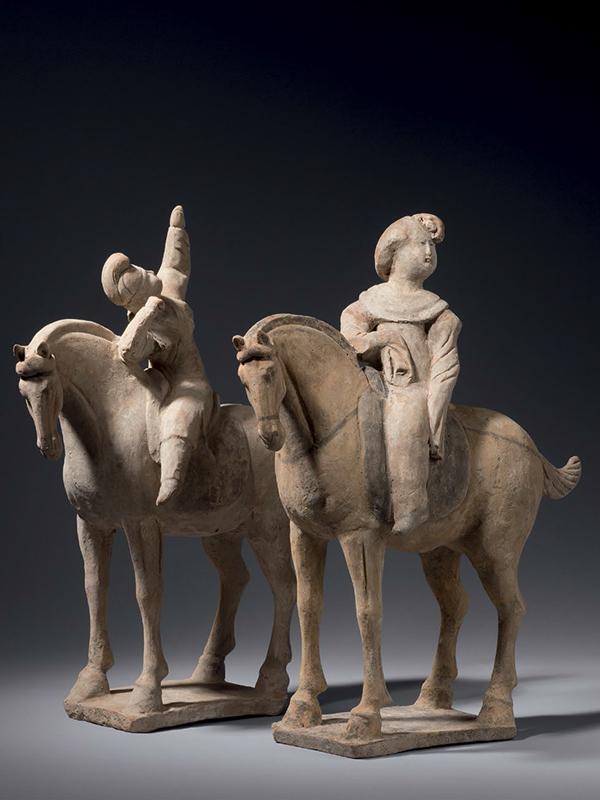 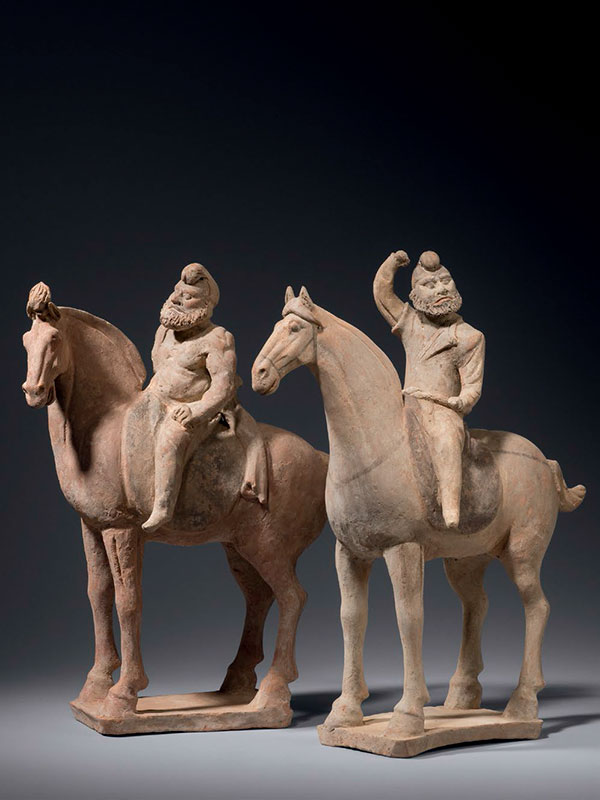 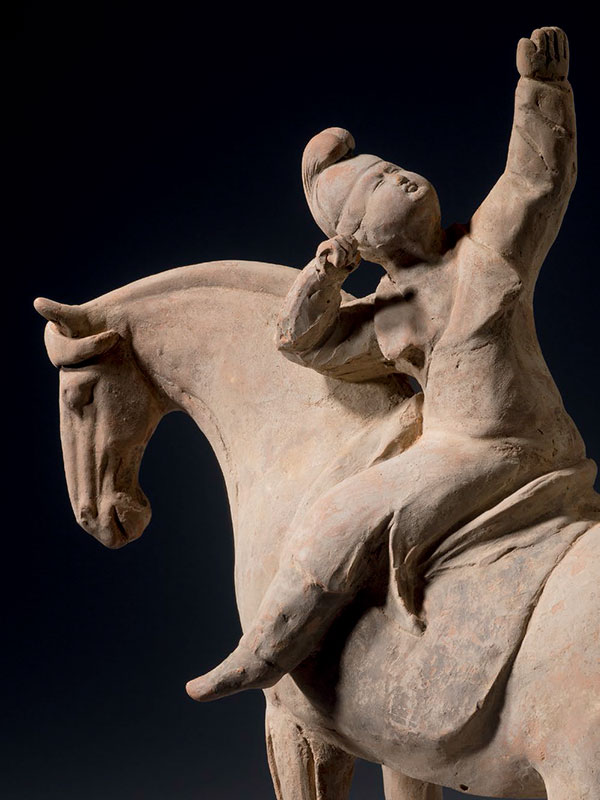 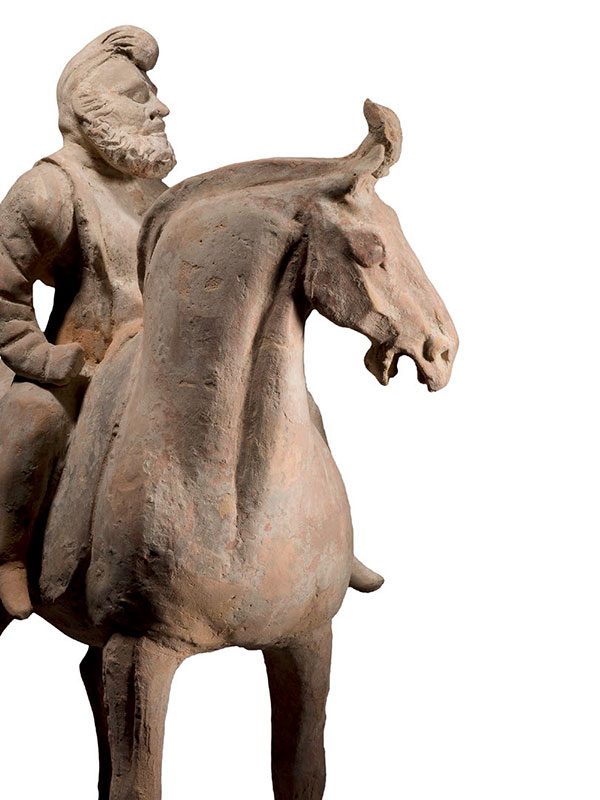 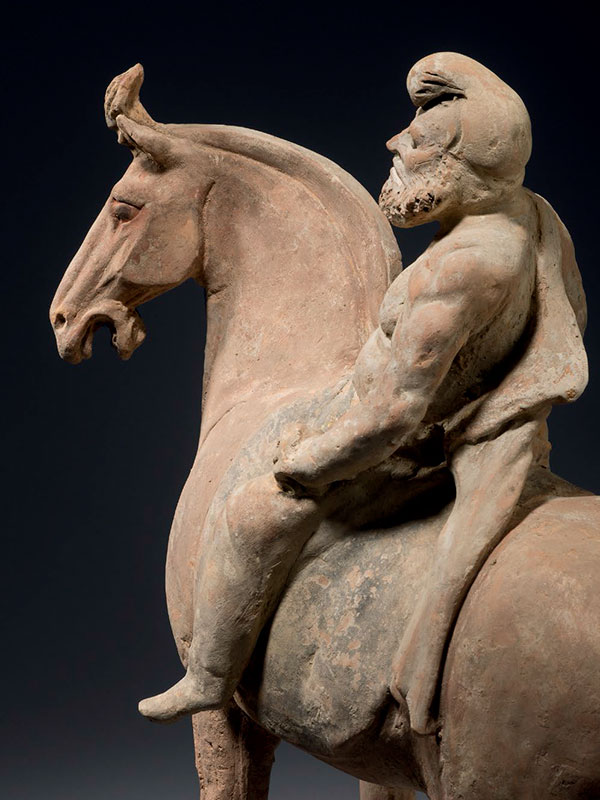 A group of four red pottery equestrians. The naturalistically modelled horses stand foursquare on a rectangular plinth with their heads turned slightly to the left. Their expressions are alert with flared nostrils and pricked ears, their manes and tails are neatly docked. The four riders, three male and one female,
sit on saddles with blankets underneath.  They are of varying ethnicity; two are Chinese, and the other two are foreign. The first rider has Chinese features and wears a long-sleeved jacket with
a flared collar.  He turns his body, with his left hand stretched towards the sky and the right arm half raised, as if tightening a bow. The female equestrian wears a long-sleeved robe covering most of her body, revealing her pointed shoes underneath the hem. She has a plump face and an elaborate hairdo. The two other riders, who appear to be of the same non-Chinese ethnic origin, both have high cheekbones, broad noses and full beards. One of them wears a large-collar jacket with a pouch tightened around his waist; his right arm is raised over his head and the left hand rest around the thigh. The other has his jacket half opened, leaving his chest and left arm uncovered, showing his muscular body. The red pottery from which all equestrians are made is covered in a thin layer of white slip, on which extensive traces of bright pigment are visible.

This group of exquisitely modelled equestrians depicts what must have been a typical sight during the Tang dynasty: a caravan of merchants and traders of different nationalities, both male and female, travelling along one of the Silk routes, most probably one leading to or from the bustling Tang capital Changan (present-day Xian). The mix of Chinese and foreign riders provides a remarkable insight into the multi-cultural society China represented at this period and also bears witness to the keen eye and fascination with which artists observed life around them. The two riders whose faces have high cheekbones and broad noses can be identified as Turco-Mongolian.1 A group of pottery riders of similar size and identified as playing polo were excavated from Changan county, Shanxi province, in 1959 and are now in the collection of the Shaanxi History Museum.2  Another comparable group of five riders hunting, excavated from Xian city in 1991, is now in the Xian Municipal Institute of Archaeology.3 Modelling of such high quality can be seen also on male and female equestrians in the collection of Anthony M. Solomon.4