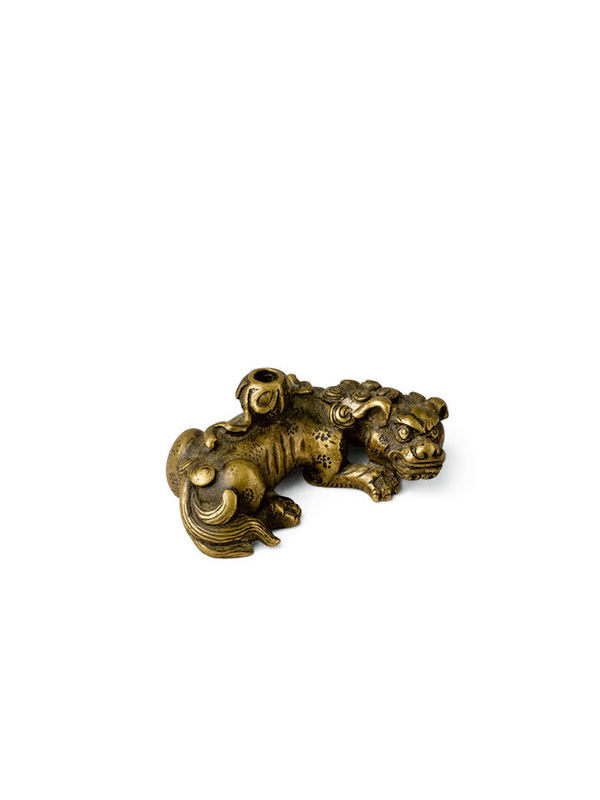 Gilt bronze paperweight in the form of a recumbent lion

A gilt bronze paperweight in the form of a recumbent lion. The animal turns its head toward the right side of its body, with ears folded down, its four arched legs tucked under its body and the paws resting flat on the ground. The round eyes, strong jaw, and curly mane are well defined. The tail is curled around the hindquarters. The Iion carries a beribboned ball on its back, which is pierced through and resembles a vase. The patina is of predominately yelIowish colour with some darker areas.

The flat, unworked base indicates that this finely cast miniature sculpture of a lion was used as a paperweight. The soft curls of the mane, which can be seen on this lion, are distinctly reminiscent of bronze Buddhist lion sculptures of the Tang dynasty (618 – 906).1 Lions are traditionally associated with Buddhism and royalty in China. The majestic stone or bronze lions used to guard the entrances to official buildings and residences in China are usually depicted in pairs, the male playing with a ball and the female protecting her cub.2 A comparable gilt bronze paperweight in the form of a seated lion, dated to the Ming dynasty, was included in the 1986 exhibition Arts from the Scholar’s Studio.3 Another comparable bronze recumbent lion, with two playful cubs on its back, dated to the late Ming or early Qing dynasty, is illustrated in Chinese and Japanese Bronzes, A.D. 110-1900.4