Giltbronze figure of a bearded sage holding a scroll 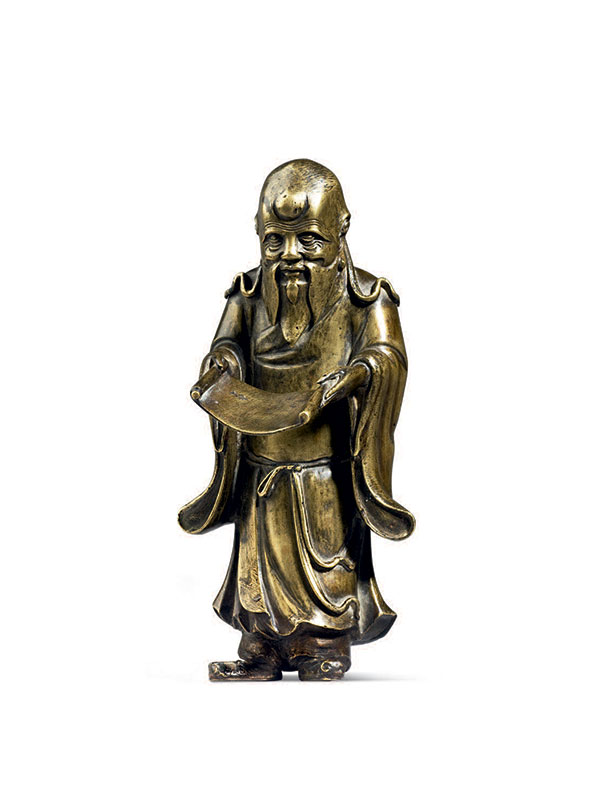 A giltbronze figure of a standing sage, his back slightly bent forwards and holding an open scroll in both hands. He is dressed in a loosely draped long robe, with a string-like belt tied in knots around his waist. His bald head is raised and slightly convex at his forehead, with a chignon attached at the back of this head. His face is cast with a benign expression with deep wrinkles, downcast eyes and a layered beard. The bronze has a thin layer of gilding, with some areas showing a darker patina.

The identity of this bronze figure of a sage is not entirely clear, but he bears some resemblance either to Shouxing, God of Longevity, or Laozi, the founder of Daoism.[1] Although to our knowledge no other closely resembling bronze example is known, some comparable pieces in other materials can help us to identify the sage. An ivory figure of Shouxing of similar size, holding a book in his left hand and dated to the Ming dynasty (1580 – 1644), is in the collection of the Metropolitan Museum of Art in New York.[2] A blanc-de-Chine porcelain figure of a seated sage holding a scroll, resembling Laozi, is dated to the mid-17th century and is in the Hickley collection at the Asian Civilisations Museum, Singapore.[3] A finely carved wood figure of Shouxing of closely comparable size and with similar facial expression, dated to the Qing dynasty (1644 – 1911), is in the collection of the National Palace Museum, Beijing.[4]