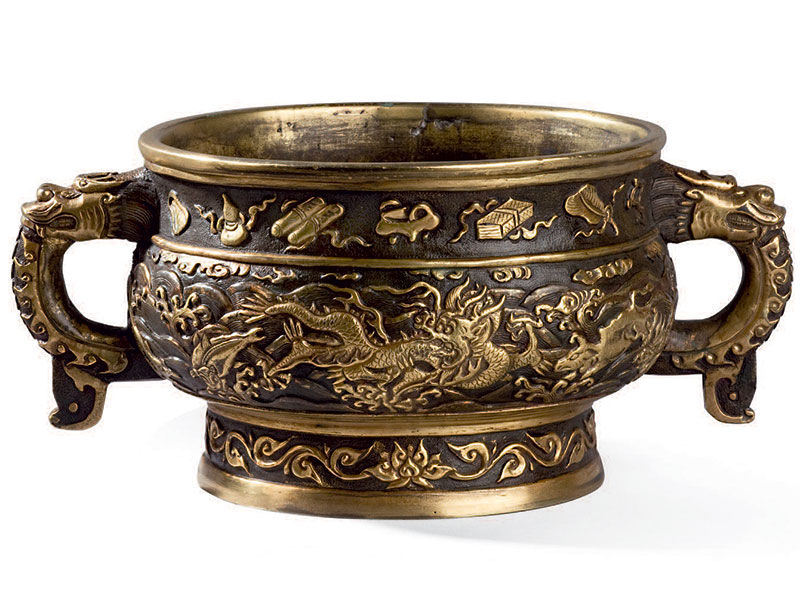 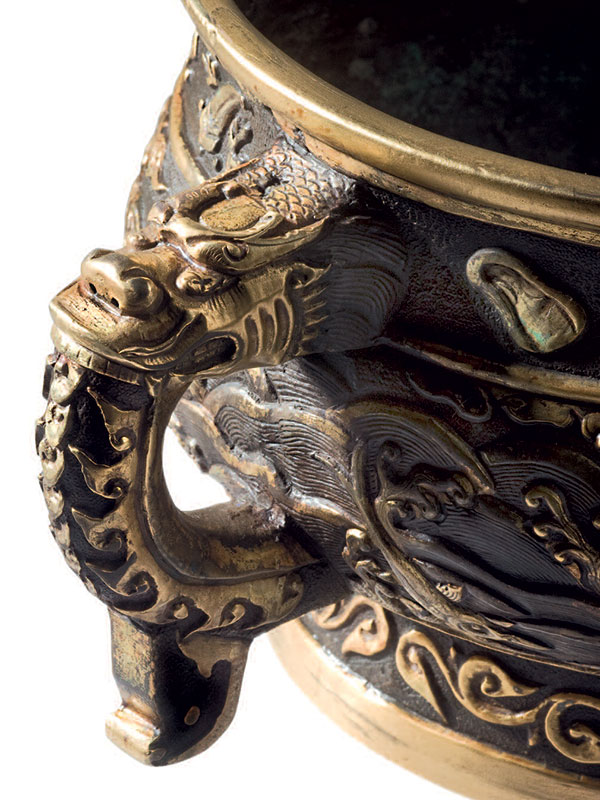 A bronze incense burner in the form of an archaic gui vessel, supported on a high, tapering foot. The rounded sides curve inwards toward the rim, and flare out again at the double lip. Two sturdy loop-handles emanating from dragonheads and terminating in pendant tabs are fixed to the sides of the burner. The main body is cast in low relief with wildly animated sea creatures and mythical animals, including a ferocious dragon, all against a background of crested waves. Around the rim is a band of regularly interspersed Buddhist and Daoist Precious Emblems, whilst a band of lotus flowers and scrolling leaves adorns the foot. The background of the design is formed by minute ring punching. The high points of the relief decoration are gilded. The base is stamped with a six.character mark reading Yunjian Hu Wenming Zhi (Made by Hu Wenming of Yunjian) within a rectangular panel.

Incense burners of this type were often placed on an altar table at a religious ceremony. Hu Wenming from Yunjian (modern.day Songjiang, just southwest of Shanghai) is considered the single most accomplished artist of the late Ming dynasty.[1] He produced works both in beaten copper and in cast bronze and it is recorded that he was particularly celebrated for his bronze ritual vessels, of which this beautiful, heavily cast incense burner is a splendid example.[2] Although the shape of the incense burner is obviously based on a late Shang (16th century – c.1046 BC) or early Western Zhou (c. 1046 – 771 BC) prototype, the decoration is not based on anything dated as early. The origin of the frolicking sea creatures may be found in Shan Hai Jing (Classic of the Seas and Mountains), a book written in the Han dynasty (206 BC – 220 AD) and illustrated in the Eastern Jin dynasty (317 – 420).[3] Fourteen Ming-dynasty blue and white porcelain stem cups, dated to the Xuande period (1426 – 35) of the Ming dynasty in the collection of the National Palace Museum, Taipei, are decorated with comparable sea.creature motifs and Tibetan/Sanskrit characters, explaining the relationship between the sea-creature and Tibetan Buddhism.[4] A Hu Wenming signed bronze incense burner with a frieze of similar mythical creatures, but with the addition of silver inlay to the top and bottom sections, is in the collection of the Palace Museum, Beijing.[5]
Another incense burner signed Hu Wenming with similar decoration is in the Clague collection at the Phoenix Art Museum.[6] A parcel-gilt bronze Hu Wenming incense burner of the same form but with a more classical decoration of taotie masks to the main frieze is in the collection of Steven Hung and Lindy Chern.[7]