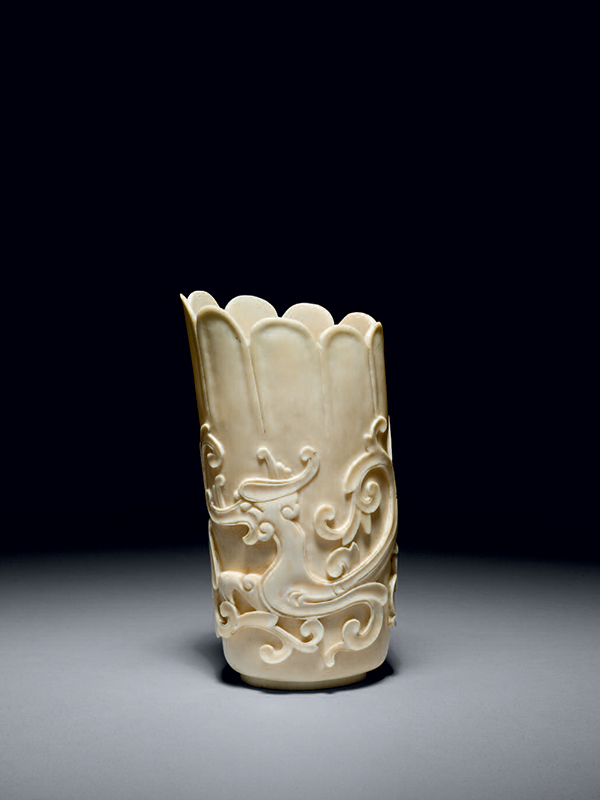 An ivory vase of cylindrical form, supported on a short, straight foot. The top is formed by nine fluted petals that together constitute a lobed rim. The lower body is carved in high relief with an elegant archaic kui dragon, curving its elongated, tendril­-like body around the vase. The head of the dragon is well­-defined with bulging eyes, a long snout with curved upper lip and horns. The ivory has acquired a mellow patina with age.

This delicate ivory vase, possibly made to be used as a brush pot on a scholar’s desk, is highly unusual, both in its design of the lobed rim and in the motif of a kui dragon. The kui dragon, characterised by its split lower part of the body and one foot instead of four feet, is a popular decorative motif on archaic bronzes during the Shang (16th century – c. 1046 BC)  and Zhou (1046 -­ 221 BC) dynasties. This kui dragon, its tendril-­like body with extremely dynamic movement, not only shows the mature, skilful ivory craftsmanship of the period, but also reflects the Qing dynasty’s preference for imitating the past. A hexagonal ivory covered vase, the body carved with archaistic decoration in the style of archaic bronzes, is illustrated by Tardy.[1] Several vases carved in relief with chi dragons were included in the 1984 exhibition at the British Museum Chinese Ivories from the Shang to the Qing.[2]