Pottery figure of a soldier 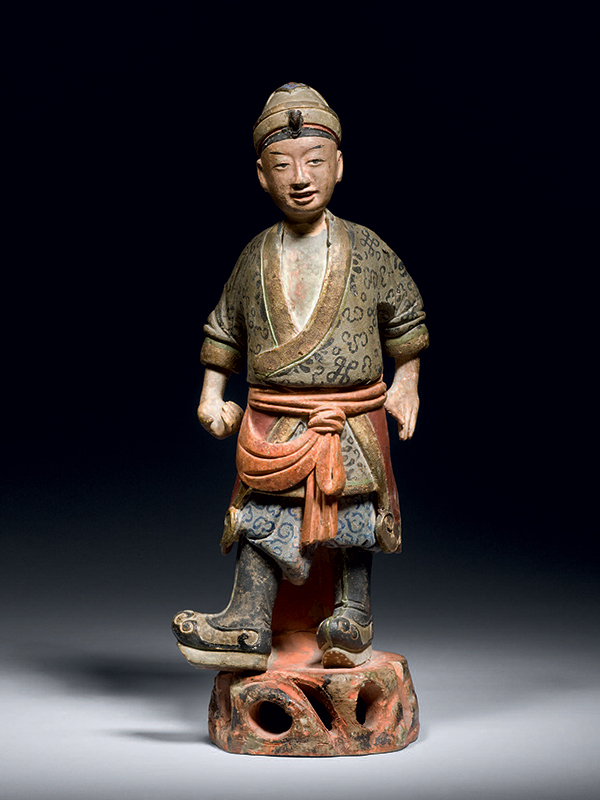 A pottery model of a soldier, standing looking straight ahead on a rock­-like base with his right foot completely turned. His left hand rests on his hip, with the thumb and the index finger spread apart. His right arm is half lifted with his hand clenched, as if grasping something. He wears an undergarment covered by a long–sleeved, three­-quarter length robe and short trousers. His robe is fastened with a cloth belt, which is neatly tied up around his waist and takes the form of a knotted sash. He wears a tightly fitting cap decorated with ruyi pattern on the top, and a pair of long, thick-­soled boots with ruyi patterns on their sides. His full face has well-­defined facial features. The figure is painted in grey, red, blue, orange, and black colours, withtraces of gilding around the edge of his cap and his garments.

This impressive pottery figure with its lively movement and delicate details of the costume is possibly one of the early examples of koji pottery, also known as jiaozhitao in Chinese. Koji pottery is a type of low­ temperature, glazed and polychrome earthenware that originated in Guangdong and Fujian provinces in the late Qing dynasty and later developed mainly in Taiwan.[1]  Koji pottery is widely used on architecture, such as temple rooftop fittings or house adornments. The costume, the court boots and the army cap (hao mao), closely resemble those worn by the Taiping Rebels (1851 – 1864).[2] This figure therefore possibly represents a soldier of the late Qing dynasty or the early Republic of China. Two closely comparable koji pottery figures of soldiers, of similar size, style and colour combination, dated to 1860, are in the collection of the Yeh, Wang Koji Pottery Museum  in Taiwan.[3]  Yeh Wang, born in Jiayi county, Taiwan in 1826 is one of the key masters in the development of koji pottery.