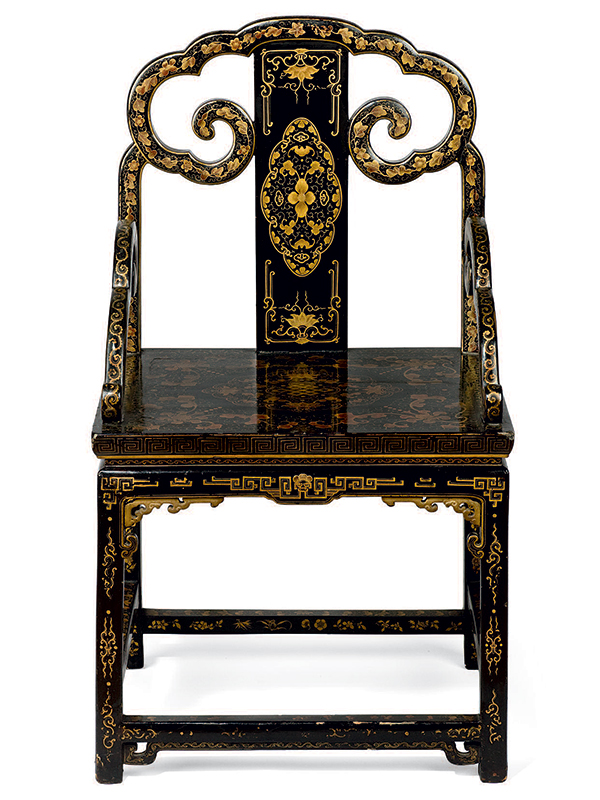 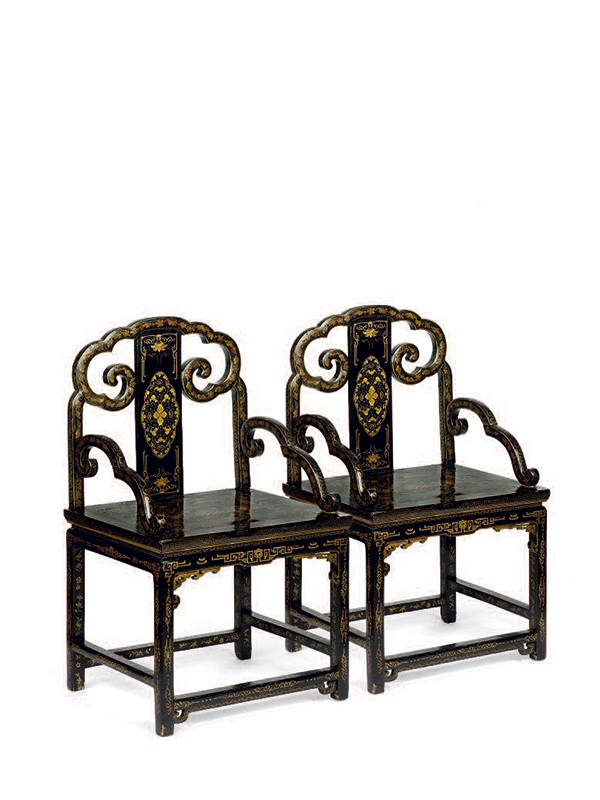 A pair of lacquered wood armchairs, each with a rectangular seat, a straight back and supported on four square legs joined by stretchers, with a double stretcher at the front.  The top of the back is of foliated ruyi outline.  The back is joined to the seat by two S­shaped, curved armrests. The chairs are both decorated in gilt on a black lacquer background.  The seats have a central motif of the Endless Knot, one of the Eight Auspicious Emblems. The back splats are decorated with two bats in a shaped cartouche, flanked by stylised leaf ornament. The chairs are otherwise covered in a decoration of flowers, fruits, leafy tendrils, and intricate key fret pattern.

The eye­-catching gilt decoration on a black lacquer background makes this pair of chairs especially striking. This technique of decorating, known as miaojin in China, had been practiced in Guangdon since the 16th century and was probably introduced from Japan.  It creates a striking effect, particularly on furniture. Two distinctive ‘Qing’ features are evident on the present pair of chairs, the very wide seat and the vertical back that replaces the shaped back of the earlier chair.[1]  Clunas suggests that from about 1720, apart from pieces used in the Qing Imperial Court, much furniture in this style was produced in Guangdon for export to Europe.[2]  A closely comparable gilt-­decorated black lacquer armchair with a straight back dated to c. 1730­-1800 and possibly made in one of the Guangdon workshops, is in the collection of the Victoria and Albert Museum.[3]  Two further comparable armchairs are in the Qing Court Collection in the Palace Museum, Beijing: a gilt-­decorated black lacquer armchair with comparable decoration [4] and a zitan armchair, dated to the Qianlong period, which is of similar shape.[5]