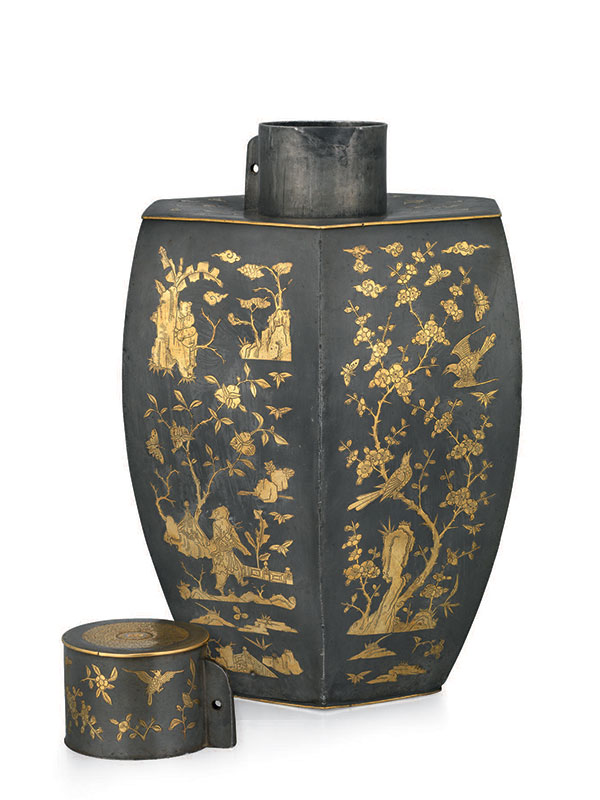 A pewter tea canister of hexagonal section, the sides rising from a flat base and bulging outwards, before tapering towards a flat shoulder. The circular mouth is fitted with a double lid with a flange to one side, enabling it to be locked. The six side panels are each engraved and gilded with scenes of wooded landscapes, some featuring gentlemen scholars and their attendants, others with trees and birds. One gentleman is depicted mounted on a horse, others are playing a game of chess underneath a tree. The flat shoulder and cover are similarly decorated with phoenixes and cloud scrolls. The top of the lid has a pattern of overlapping petals.

This canister was made to contain tealeaves and the lockable double lid shows that the contents were considered precious and quite valuable at the time. Canisters such as this example were frequently exported to Europe; as Jenyns and Watson have pointed out, “The use of pewter was largely confined to utilitarian vessels and boxes of which certain tea.caddies […] became well.known in Europe in the 18th century.”[1] The gilded, engraved decoration as seen on the present piece is typical of that on pewter items; it stylistically resembles two tea-caddies in the Maertens de Noordhout collection.[2]