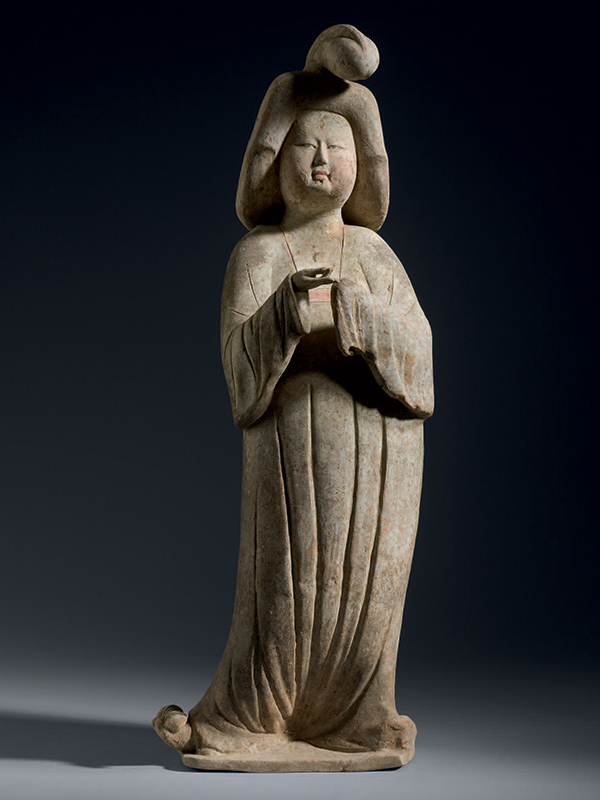 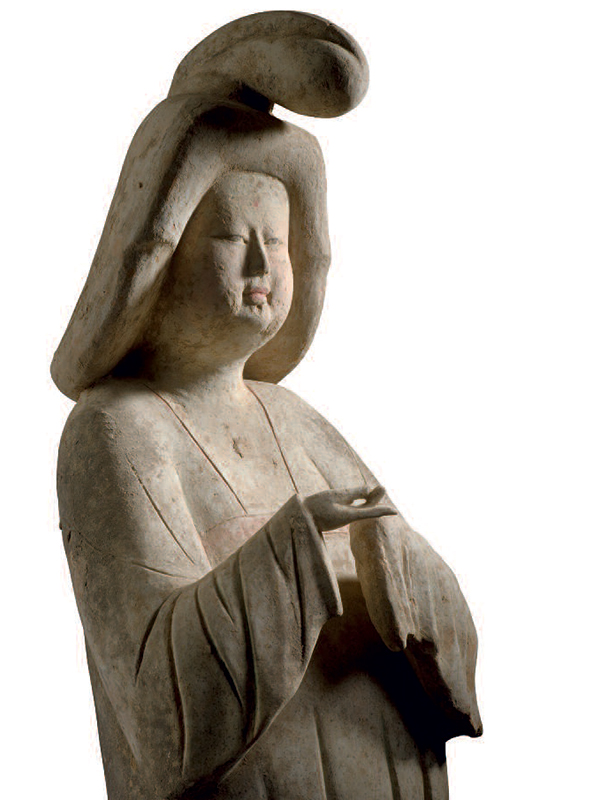 A pottery figure of a court lady, standing on a low base. The lady is dressed in a long-sleeved, high-waisted robe that falls in pleats to the floor, covering her left foot, whilst her right foot is exposed, showing an extravagant cloud-shaped ornament on her shoe. She holds both her hands in front of her. Her left hand is hidden inside the sleeve, whilst the fingers of her right hand are exposed and held in a lotus gesture. Her hair is neatly arranged covering the back of her neck and tied into an extravagant chignon. The pink-cheeked face has a demure expression with delicate features. The pottery is covered in a thin layer of white slip, and retains traces of the original red, green and black pigments. .

This imposing, plump pottery figure, most probably a high rank court lady, represents the concept of beauty and fashionable costume at the time. The distinctive hairstyle of the present figure is known as duomaji (‘falling horse bun’) or woduoji (‘shirt falling bun’). The painting Emperor’s Favourite on Spring Excursion depicts Madame Guoguo in similar clothes, cloud.shaped shoes and with an equally elaborate hair arrangement.[1] Madame Guoguo was the third elder sister of Yang Guifei, a beloved concubine of the Tang emperor Xuanzong (712 – 756). A similar pottery lady, with both her hands covered by sleeves, with comparable clothes and hairdo but with less elaborate details, was excavated from a tomb dated to 745 nearby the eastern suburb of Xiang city and is now in the collection of the Palace Museum, Beijing.[2] Another slightly smaller pottery figure of a court lady dated to the mid 8th century, with similar clothes and hair arrangement, is in the collection of Anthony M. Solomon.[3]