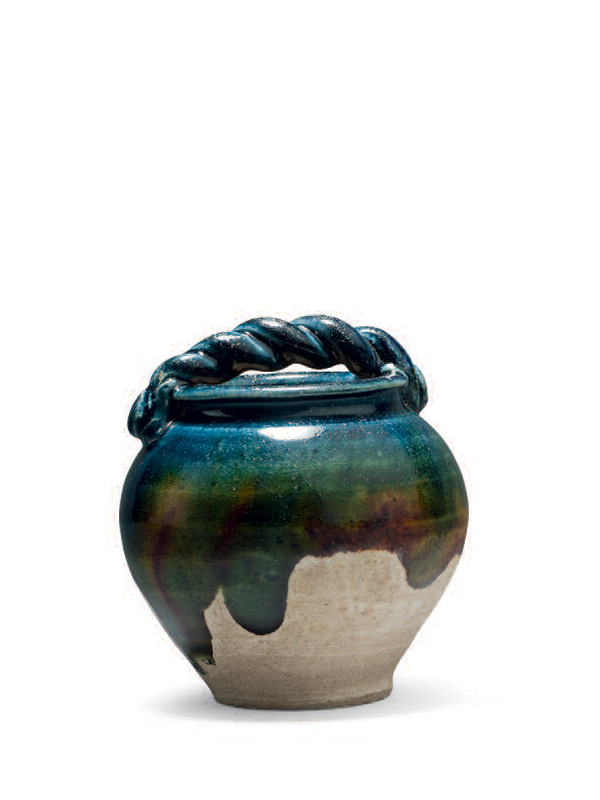 A miniature pottery model of a bucket, the rounded body supported on a short foot and rising to a lipped rim. An overhead handle of ‘rope-twist’ form is attached just below the rim with two studs. The handle and the upper part of the body are covered in a deep cobalt blue glaze with splashed brown and green tones. The unglazed lower part of the body and the base reveals the buff-coloured clay.

The fact that so many Tang dynasty pottery shapes closely copy a metal form suggests that they were especially produced to accompany the deceased, as it is obvious that such a delightful miniature bucket as the present example could hardly have been intended for practical use. The parallel between ceramics and metal is reinforced here by the application of pottery ‘studs’ that imitate the metal nails that would have been used to hold together the original metal vessel. Three comparable Tang dynasty miniature bronze buckets, similar in size and form, were shown in the exhibition Tin-Bronze of China in the Kuboso Memorial Museum of Art, Izumi, Japan in 1999.[1] It would appear that miniature pottery buckets from this period are exceedingly rare, and most of the known pieces with either monochrome or polychrome glazes have been found in Henan, Hebei, and Shaanxi provinces. A very similar miniature Tang pottery bucket of comparable size and with a twisted handle but applied with only green and brown glazes, is in the collection of the Asian Art Museum of San Francisco.[2] A further comparable miniature black-glazed pottery bucket of similar size and with an overhead handle, excavated from the Huangbao kiln in Shaanxi province in 1987, is now in the collection of the Shaanxi Institute of Archaeology.[3]