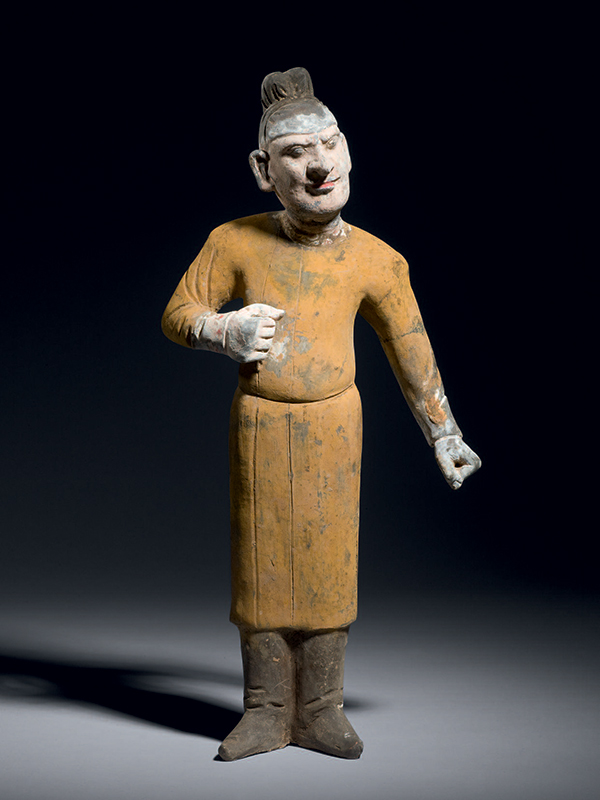 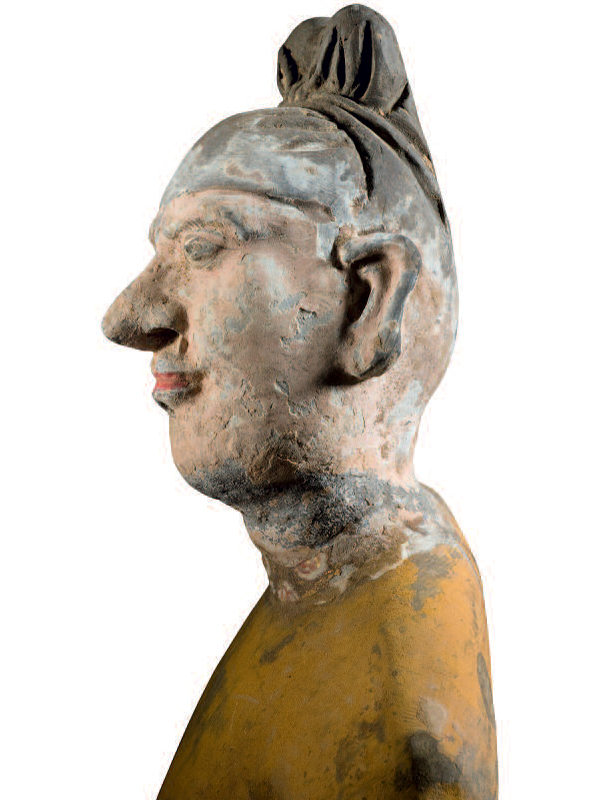 A pottery model of a foreign male groom, standing tall and slightly inclining his head towards the left. His upper torso is tilted at a slight angle with the left shoulder dropped and his left arm extended downwards. He holds his right arm up towards his chest with the elbow bent. Both his hands are clenched in a fist, as if grasping something. The figure is dressed in long sleeved robes. The black belted outer robe, which loosely drapes above the top of his flat pointed black boots, is painted a deep ochre colour. The white inner robe with scroll patterns is painted in red and gold colours and is partially visible around his collar and at the two ends of his wrists. He wears a soft, double-peaked black cap and his hair is piled up in a double bun. His full and strongly defined facial features indicate that he is of non-Chinese extraction. His arched eyebrows, bulging eyes, large and prominent nose and fleshy lips define his animated facial expression. There are some traces of gold leaf decoration, notably around the collar, as well as remains of coloured pigments on the surface of the pottery.

The animated stance and the expressive hand gestures of this fine pottery figure suggest that he is a groom who originally held the reigns of a pottery horse or camel. His prominent facial features suggest he is of Central Asian extraction. The robes and double-pointed headdress, fu tou, which were common dress for men during the Tang dynasty,[1] indicate that this foreigner was wel-accustomed to Chinese life and traditions. This groom perfectly represents the multi-ethnic society of cosmopolitan Tang dynasty China. A closely comparable unglazed figure of a bearded foreign groom, dated to the early 8th century, similar in size and stance, is in the collection of the Victoria and Albert museum.[2] Another comparable painted pottery figure of the same size, with similar headdress and stance, dated to the 7th or 8th century, is in the Meiyintang Collection.[3] Two larger pottery figures of grooms comparable both in their gestures and in their headdress, one identified as of African origin, are in the Muwen Tang Collection.[4]