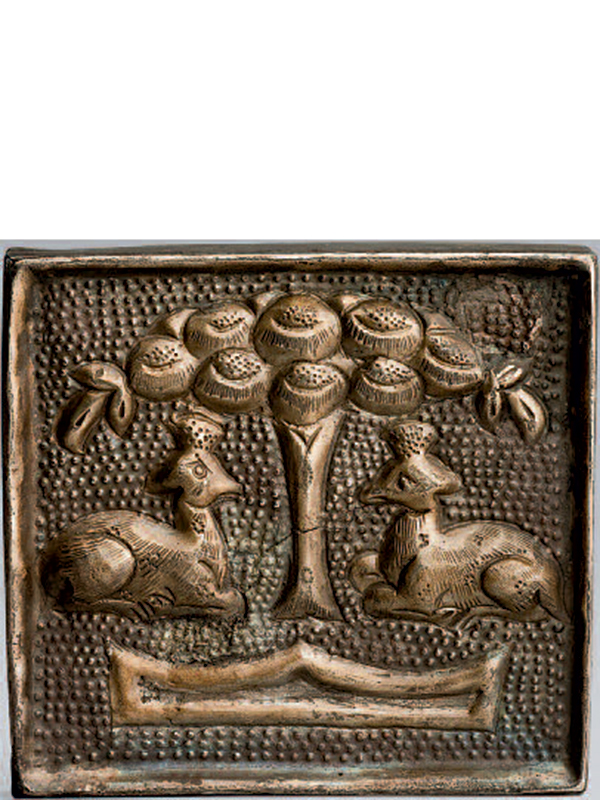 A silver belt plaque of rectangular form, the short sides folded over. The front of the plaque is decorated in repoussé with two deer, confronting each other and depicted in a recumbent pose on either side of a tree that bears large fruit and leaves and grows above a basin-shaped ornament. Each deer’s head is crowned by a lingzhi crest and the animal’s fur is indicated by finely incised lines. The design is set against a ground of small raised dots. The raised parts of the design are gilded.

This partly gilded silver plaque was originally used as an ornament on a leather belt, possibly worn by a high-rank official. Deer are popular as a motif both in the Song (960 – 1127) and Liao dynasties, although their meanings are different. In the Song dynasty they represent Luxing, the God of rank and emolument in Chinese mythology and symbolize longevity.[1] In this capacity, they are often found on ceramics.[2] For the Qidan people during the Liao dynasty, deer are worshipped by Tungusic shamans and are objects for hunting.[3] A set of gilded silver belt ornamental plaques with closely comparable deer motifs and decoration is in the Mengdiexuan Collection.[4] Writing in Noble Risers from Pines and Deserts – The Artistic Legacy of the Qidan, So points out that a set of gilded silver ornamental plaques, each with twin deer decoration as the main motif, was excavated from a Qidan tomb at Zhangwu in Liaoning province.[5]