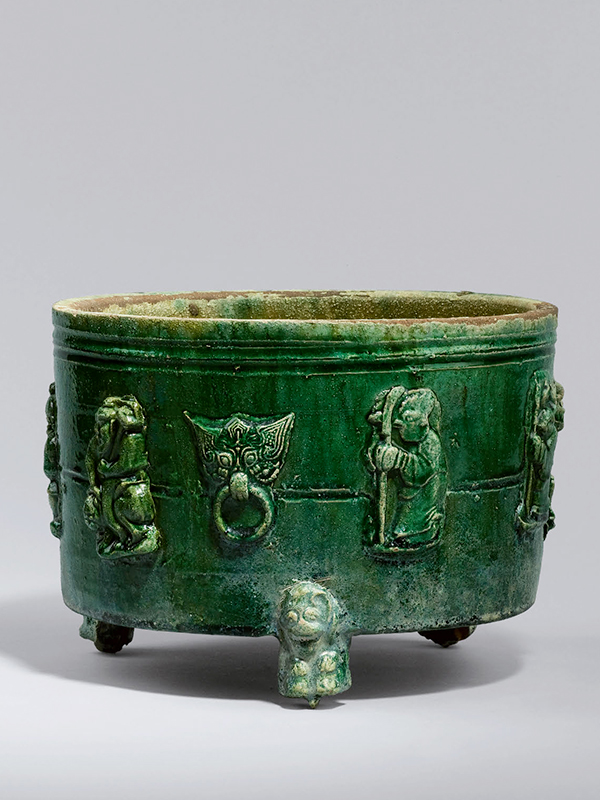 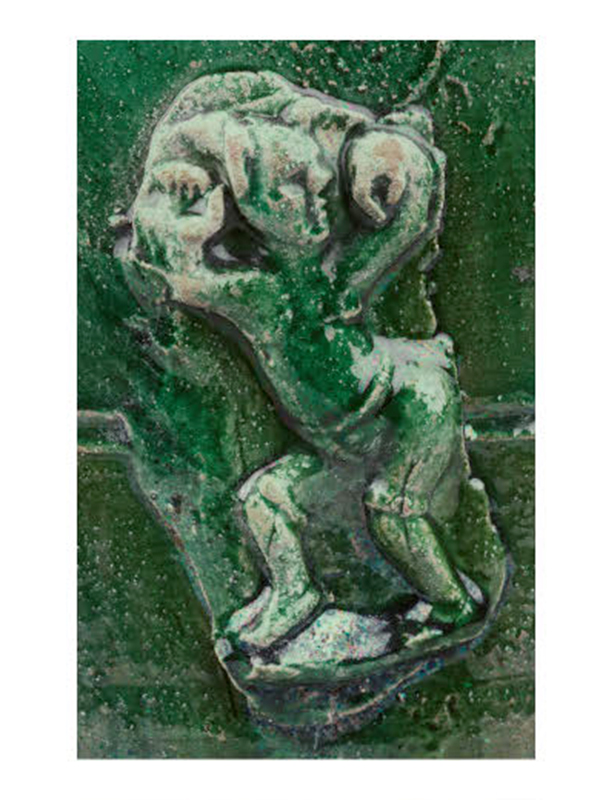 A pottery jar of cylindrical form, supported on three moulded feet in the form of bears that rest their hands on their knees. The straight sides are moulded with two low-relief mock-handles in the form of taotie masks with rings, and applied with a procession of seven separately moulded human and animal reliefs. They represent respectively a crouching demon-Iike figure, a man with grotesque features riding an animal, a standing figure with the head of a cockerel holding a staff, another standing figure with an ox’s head also holding a staff, a dancer or entertainer holding his hands aloft, a seated figure playing a wind instrument, and another smaller seated figure playing double flutes. The exterior of the zun is covered in a glossy green glaze that has acquired a metalIic sheen overall. The interior is covered in a brownish-green glaze.

Han dynasty pottery shapes often have parallels in lacquer and metal, which certainly is the case with this zun.1 Krahl observes that during the Han dynasty tombs were often looted, which resulted in expensive materials such as bronze gradually being substituted by cheaper materials such as pottery, and that the poisonous lead content in the glaze would have made pieces such as this unsuitable for storage of food and drink, making it more likely that the present jar was intended for use as an incense burner.2 The feature that makes this particular zun highly unusual is the application of the separately modelled and applied plaques of animal and human figures to its sides. Their significance is not entirely clear; they are ostensibly a mixture of figures representing the Chinese zodiac, such as the cockerel and the ox, and entertainers, such as the dancer and the musicians, whom we know enjoyed great popularity during this period.3  There appear to be some Shamanistic influences, particularly in the figures that have a somewhat demonic or grimacing appearance. The dancer or entertainer in particular strongly resembles some of the pottery figures of storytellers and entertainers from this period; a group of such figures from the later Han dynasty, unearthed in Sichuan, is in the Sichuan Provincial Museum.4 The only other pottery zun with similar applied figures that appear s to be published is in the Meiyintang collection5 (fig. 1).