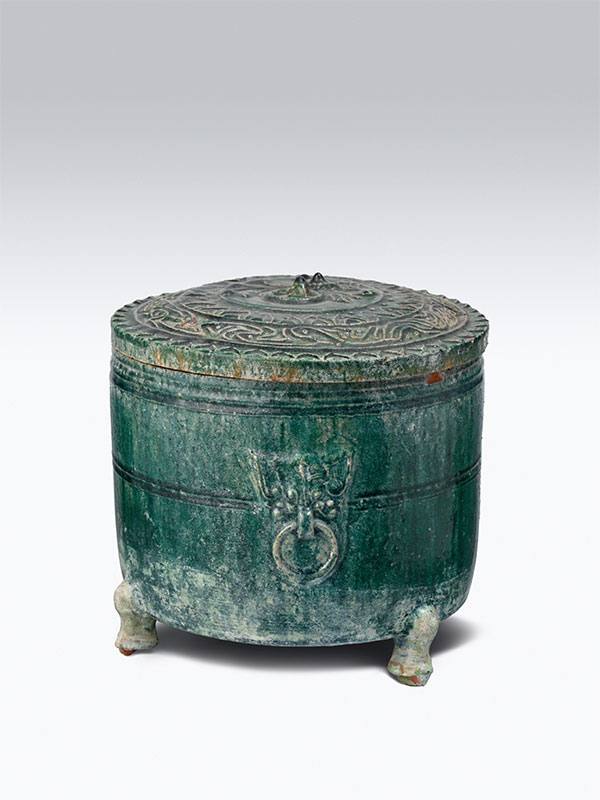 A pottery covered jar (zun) of cylindrical form, supported on three cabriole feet. The straight sides are evenly divided into two parts by two ridges and are moulded in relief with a mock handle in the form of a taotie mask with a ring. The flat cover is moulded with another ring handle and with a phoenix in flight The central scene is surrounded by three bands of triangular decoration and stylized waves. The exterior of the zun is covered in a glossy green glaze that has acquired a metallic sheen overall. The interior of both the zun and the cover is glazed in yellow.

The cover moulded with a phoenix is highly unusual. It is almost identical to the cover of a zun in a private French collection.[1] In the accompanying text, Dr. Benedetta Mottino writes: In addition to its symbolic association to beliefs concerning immortality, the phoenix was also one of the four mythical creatures which originated within the Daoist philosophy of the Warring States period. Krahl observes that during the Han dynasty tombs were often looted, which resulted in expensive materials such as bronze gradually being substituted by cheaper materials such as pottery and that the poisonous lead content in the glaze would have made pieces such as this unsuitable for storage of food and drink.[2] It is therefore more likely that the present jar was int ended for use as an incense burner; in fact, at some point this zun was converted for use as an incense burner by placing a removable metal liner inside.