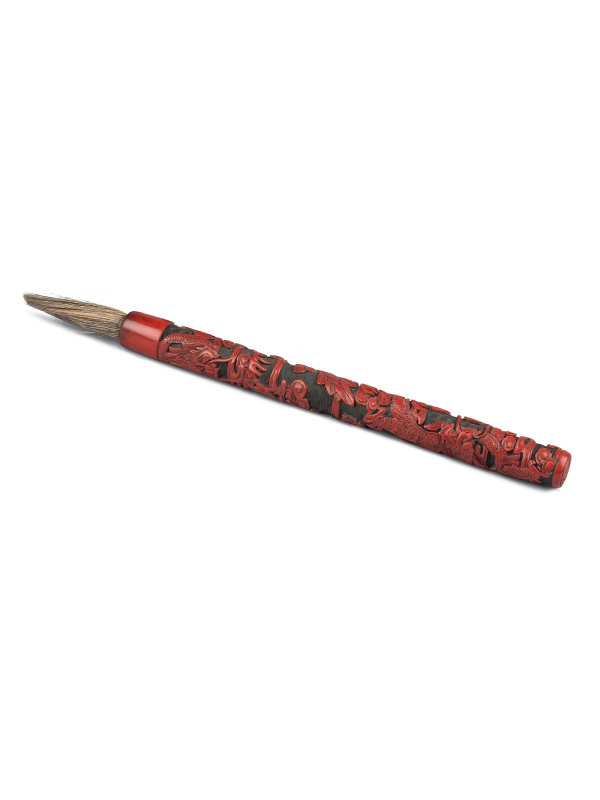 A large lacquer brush, the cylindrical shaft tapering slightly towards the top of the handle and carved with two vigorous five-clawed dragons, winding around the handle and pursuing a flaming pearl through cloud scrolls. The scene is carved through a thick layer of red lacquer to the green ground below, which is decorated with a wave pattern. The cover is similarly decorated, but in red lacquer only.  Both the top and the bottom of the brush are carved with a Shou medallion.

Brushes made from expensive materials such as carved lacquer were the prerogative of the literati class, who counted them, together with ink, paper and ink-grinding stones among the ‘four treasures of the scholar’s study’ (wen fang ssu pao).1  The present brush is a highly unusual example, as a two-coloured lacquer scheme is rarely used for such pieces, a single colour, mostly cinnabar, being the norm. It dates from the eighteenth century, which is also unusual; most extant brushes date from the Ming dynasty (1368 – 1644), such as an example with figures in a landscape setting in the Baoyizhai collection.2 A cinnabar lacquer brush dated to the 16th – 17th century in the collection of the Tokugawa Museum in Nagoya has a very similar arrangement of dragons and clouds.3   A comparable lacquer brush carved with a decoration of birds and flowers on a diaper ground and also dated to the 16th – 17th century is in the same collection.4