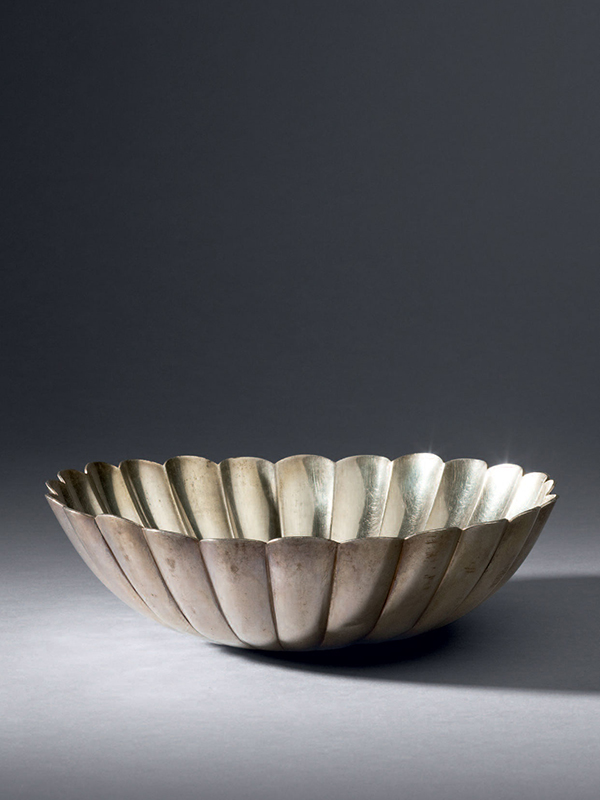 A silver bowl in the form of an open chrysanthemum flower, its sides worked into twenty.four petals of equal dimensions, rising from a flat base. The bowl is wholly undecorated. The silver is of relatively thick gauge.

The supremely simple, elegant design of this silver bowl epitomises the applied arts of the Song dynasty. Bowls of similar shape are found in both ceramic and lacquer, with the metal being generally accepted as the prototype emulated by other materials.1 A closely related porcelain bowl of qingbai type was formerly in the Kempe collection.[2] Although generally sparsely decorated, the complete absence of ornament is somewhat unusual on Song dynasty silver. Probably the closest comparison is a shallower silver bowl of chrysanthemum form that was unearthed from a Southern Song dynasty (1127 – 1279) gold and silver hoard in Pengzhou city, Sichuan in 1993, and is now held at the Pengzhou City Museum.[3] The museum also holds a slightly deeper gold bowl of similar shape, which has repoussé decoration on the interior.[4] A pair of silver dishes of six.petal flower shape, comparable in the unadorned design and dated to the Northern Song dynasty (960 – 1127), is in the Muwen Tang collection.[5]